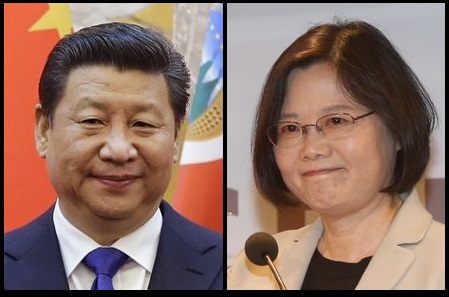 Democratic Progressive Party Chairwoman Tsai Ing-wen’s inauguration as Taiwan’s first-ever woman president is now only two weeks away, and speculation is mounting as to how relations between Taiwan and China will evolve under her stewardship.
The long transition period since the January 16 election has been overshadowed by the selections for her government team and occasionally interrupted by media storms about comments by team members deemed inappropriate. Most of those incidents focused on issues not directly related to the China issue, such as pork imports from the United States and expropriations of private homes.
As May 20 approaches, and the world expects Tsai to present an inaugural speech, speculation has mounted as to what the new president will say. She is only the second head of state to come from the DPP, a party she only joined after serving as minister of the Mainland Affairs Council under the first DPP president, Chen Shui-bian.
That era, from 2000 to 2008, was marked by tense incidents such as China’s passage of a so-called “Anti-Secession Act” targeted at Taiwan and by “defensive referendums” on the island.
After the Kuomintang returned to power and President Ma Ying-jeou was elected in 2008, there followed eight years of rapid improvements – but too rapid to many Taiwanese, who have accused Ma of sacrificing Taiwan’s dignity and sovereignty in return for trade and other deals that locked in the island tighter to the Chinese economy.
The occupation of the Legislative Yuan by student activists in a protest against a trade-in-services pact in 2014 was the harbinger of a series of electoral defeats for the KMT, which culminated in the election of a DPP president and a first-ever absolute DPP majority at the Legislative Yuan last January 16.
Tsai is expected to help the pendulum swing back from over-reliance on China to a healthy center, while trying to avoid the clashes of the Chen era.
During the election campaign, she repeated over and over again that she wanted to observe the status quo, i.e. not move the island toward unification, as Ma was seen by his critics to be doing, but not make any brusque moves toward formal independence either.
The discussion about Tsai’s expected inauguration speech seems to be focusing on the dreaded “1992 Consensus,” a formula which has been dividing Taiwan for two decades.
In 1992, during the early days of contacts between the KMT government on Taiwan and China, delegations from each side met in Hong Kong to discuss cross-straits issues. According to the KMT, the two sides reached an agreement that there was only one China, but that each side, the governments in Beijing and Taipei, could have their own interpretation of what that China was.
To China, of course this was the communist-led People’s Republic of China, while to the KMT, the “One China” was its Republic of China government in Taipei.
The Ma Administration has been insisting that accepting the “1992 Consensus” has been the basic element in improving and stabilizing positive relations with China.
However, the DPP and many other observers, including former President Lee Teng-hui, during whose tenure the consensus is supposed to have been reached, deny its existence.
In a recent interview with the Japanese media, former Premier Frank Hsieh pointed out that while the existence of a consensus is unacceptable, the DPP does acknowledge there was an important meeting in 1992 which paved the way for establishing a working relationship. Hsieh said there was “a spirit of 1992” which allowed for agreements between the two sides, even if it was not a consensus on two versions of “One China.”
While one should not take every statement from any DPP member as representative of Tsai’s opinions, Hsieh’s interview shows first, that Tsai can hardly be expected to suddenly endorse a “1992 Consensus” that a significant part of the Taiwanese establishment has never accepted as real, and second, that the new DPP administration does value positive relations with China.
Tsai has repeatedly emphasized the status quo in Taiwan’s status, while also underlining the importance of stable regional and bilateral relations. That should be enough for China to accept her, especially since she was chosen by Taiwan’s 23 million people to govern over the country over the next four years.
There would be nothing less wise for Beijing than to treat Tsai without respect, because instead of Ma, she will be the face of Taiwan for at least the next four years. It is also difficult to expect that the KMT will be sufficiently recovered from its heavy drubbing at the recent elections to expect it to put forward a viable presidential candidate in 2020, so whether it likes it or not, China will have to talk to Tsai’s government if it doesn’t want relations with Taiwan to stall completely.
If over the past eight years, China managed to sit down with Taiwan and conclude agreements on a variety of topics, there is no reason why it should not continue to do so with the same Taiwan, be it under a different government.
The transition period since the election has been marked by continued Chinese attempts to create trouble, from the deportation of Taiwanese fraud suspects from Kenya and Malaysia to China, to the question of whether Taiwan will be able to be represented at this year’s World Health Assembly in Geneva.
It is to be hoped that China’s President Xi Jinping will give up tactics that will only engender a deeper backlash from the public in Taiwan, and lead to no benefits for anybody in the region.
Tsai should stand by her principles in defending Taiwan’s sovereignty and de facto independence, principles which do not clash with developing trade and economic relations with China in as far as they do not threaten the island’s status.
Realpolitik is the only mature and positive approach China can take if it wants relations with Taiwan to remain stable and benefit the whole region.