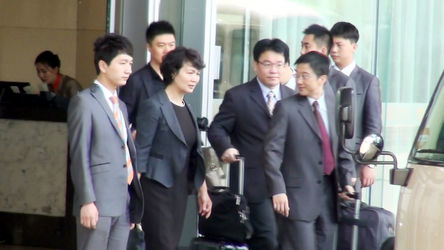 When a crime happens, you catch the suspect. When a crime happens in one country and involves perpetrators and victims from another country, international treaties come looking around the corner.
Suspects can be extradited according to a fixed procedure and be prosecuted and tried by a court in their own country or in another country.
However, all of that gets thrown overboard when Taiwan and China are at play.
Courts in distant Kenya, a country which does not maintain official democratic relations, apparently ruled that several Taiwanese suspects in fraud rings scamming by phone or Internet could be released. Under normal procedures, they might have been deported to their country of origin, in that case Taiwan.
However, with the excuse that the alleged victims were Chinese, China persuaded the Kenyan authorities to disregard their own judiciary’s rulings and send up to 45 Taiwanese straight to Beijing.
Understandably, this caused an immediate uproar in Taiwan, where the public overwhelmingly rejects claims by China that the island is not a separate country and does not have a valid government. Beijing’s action in Kenya looked like the latest incident where it treated Taiwan as its own province and Taiwanese nationals as its own.
While a considerable part of public opinion said the suspects only deserved their fate because they had been scamming the weak and the elderly, it nevertheless still remained a fact that Taiwan should have been heard in the case and should have been consulted about their deportation.
Taiwan and China signed a grandly named Cross-Straits Joint Crime-Fighting and Judicial Mutual Assistance Agreement, but when Beijing wants something, it apparently still goes ahead and takes it, regardless of what Taiwan, its government and its public opinion think.
The Ministry of Justice added to the outrage by at first whitewashing China’s action, saying they were right to lay a claim on the Taiwanese suspects because the victims had all been Chinese citizens.
The statement triggered an escalation of heated exchanges between lawmakers and Justice Minister Luo Ying-shay which led to demands for her resignation, even though she now has less than one month left in office.
China fanned the flames of dissatisfaction by hinting that a delegation of Taiwanese government representatives to discuss the issue would not be welcome. Relatives could come and talk with the suspects, but not employees of the government it does not recognize, seemed to be China’s line.
On Wednesday, the delegation finally arrived in Beijing for talks with the Chinese authorities and they were also reportedly allowed to have contacts by videoconferencing with the Taiwanese suspects.
At the head of the delegation was Chen Wen-chi, the director of the MOJ’s Department of International and Cross-Straits Legal Affairs and a veteran negotiator. The 10-member group also included representatives of the Mainland Affairs Council, the Straits Exchange Foundation and the Criminal Investigation Bureau.
While the visit seemed to signify a step forward, President Ma Ying-jeou immediately poured cold water by saying Thursday that there might be no solution to the problem by the swearing-in of his successor Tsai Ing-wen on May 20. Such a statement was unlikely to help Taiwan’s cause, giving China more time to face down pressure from the island.
There also have been fears for a tidal wave of similar cases, damaging Taiwan’s international image and relations with China. In the wake of the Kenya incident, news surfaced that several other countries, including Malaysia, Australia and Vietnam, had detained Taiwanese suspects for similar fraud ring activities.
It was only through efforts by the Ministry of Foreign Affairs after indications from the New Power Party that a similar scenario as the Kenya case was averted. However, a new public outcry arose when the suspects from Malaysia were immediately released upon their arrival back in the country because the Southeast Asian nation had already sent their files to China. The affair was put right when 18 suspects were finally picked up Thursday.
At the core of the whole issue is whether Taiwanese suspects can expect a fair trial in a communist country like China, which still persecutes human rights activists, lawyers, journalists and supporters of ethnic and other minorities.
The case of the fraud ring suspects is not just purely a judicial matter, it also has serious political connotations. The sudden action by Beijing has also been linked to the imminent arrival of a new government in Taiwan. China finds it hard to accept that a vast majority of Taiwanese voters rejected President Ma’s policies in last January’s election, and that the new Democratic Progressive Party majority is likely to conduct policies which put Taiwanese interests before appeasement of Beijing.
Another outburst of Chinese meddling and intransigence just within the past week was its demand that Belgium expel Taiwanese representatives from a steel meeting of the Organization for Economic Cooperation and Development in Brussels.
While delegations of the steel sector were allowed to attend a business-related seminar, Taiwanese government representatives were thrown out, supposedly because China felt their level was not high enough.
Belgium apologized to Taiwan, though doing so after the fact is easier than preventing injustice from happening in the first place.
Incidents like the interference with the suspects in Kenya and the international conference in Belgium are only likely to occur more frequently as China plays games to try and provoke Taiwan and its new government, a tactic which has never worked in alienating the people of the island from the government it has chosen in a free and democratic way.
Instead of bullying and intimidating the people of Taiwan, China should present a responsible and mature attitude, showing a great nation can respect the human rights and the sovereignty of another country it might not agree with on all points.
Taiwan is a democracy, and a democracy will have frequent changes of government. China needs to understand that it should respect the will of the Taiwanese people and the government which represents it.