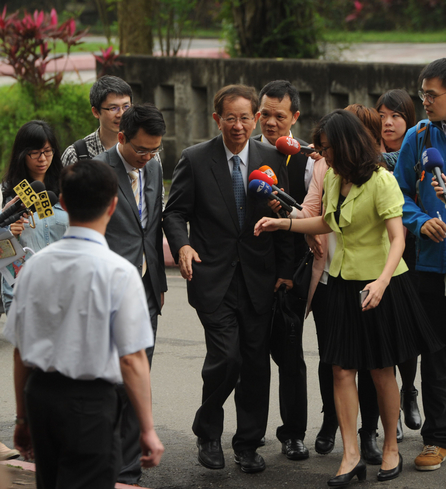 TAIPEI (Taiwan News) – The Academia Sinica narrowed down a list of prospective candidates for its presidency from four to three Saturday amid the controversy enveloping its current head, Wong Chi-huey.
The top academic returned to Taiwan and met President Ma Ying-jeou Friday, denying his alleged involvement in an insider trading scandal. He reportedly did not repeat an offer to resign, but since his 10-year period in office ends in October, the procedure to choose his successor has already started.
An Academia Sinica review committee met at 10 a.m. Saturday amid extensive media attention due to the allegations against Wong. However, committee members were unwilling to comment on their current head or on his potential successor.
According to the official procedure, the committee had to consider three of the present four candidates. After two hours of presentations and debates, the committee held one round of voting which succeeded in choosing the three remaining contenders, though the result was not announced to the public.
The four academics on the current list of candidates are reportedly incumbent vice president Wang Fan-sen, former National Dong Hwa University President Wu Maw-kuen, James Liao, professor at the chemical and biomolecular engineering department at the University of California in Los Angeles and Way Kuo, president of the City University of Hong Kong.
Kuo was reportedly a high-school classmate of President Ma and has been described by some observers as “pro-Chinese.”
Within a month, the Academia Sinica will forward the three selected names to President Ma, who will make the final choice. The last step of the procedure has also been mired in controversy because Ma leaves office on May 20. Commentators have said his successor, Democratic Progressive Party Chairwoman Tsai Ing-wen, should be allowed to choose the new Academia Sinica president.
Wong tendered his resignation twice, but both times, Ma turned it down. The academic came under fire as allegations surfaced he had donated shares in biotechnological pioneer OBI Pharma Inc. to his daughter, and at least some of the shares had been sold just before the company announced negative results of a cancer drug test trial.
OBI Chairman Michael Chang was listed as a defendant in the case early Saturday with four other company officials after questioning by prosecutors, reports said.