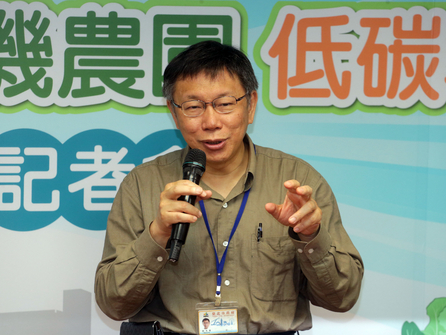 TAIPEI (Taiwan News) – Taipei City Mayor Ko Wen-je and his predecessor Hau Lung-bin quarreled Saturday over who was to blame for the recent decision to end the contract with developer Farglory Group to complete the controversial Taipei Dome.
Work on the complex, centered on a 40,000-seat stadium, was halted last year amid concern by the Taipei City Government that it posed threats to safety, while the price tag also formed a point of discussion between the outspoken Ko and Farglory tycoon Chao Teng-hsiung.
Earlier in the week, the two sides agreed that the contract could be dissolved, though the city said it would not cost even “half a penny,” while Farglory was hinting at compensation and other payments of up to NT$37 billion (US$1.14 billion).
Criticized by some for his handling of the problem and for the long time it was taking for a solution to be found, Ko said he was only solving other people’s problems, a reference to previous mayors, President Ma Ying-jeou and especially Ko’s immediate predecessor, Hau Lung-bin, both of the Kuomintang.
If he was bruised and battered by the Taipei Dome issue, it was only because he had been forced to deal by problems created by the previous administration, Ko said, adding it wasn’t he who had chosen where and how the project should be built.
Hau struck back Saturday by wondering if the new mayor was solving problems or creating even more trouble. Even if the contract was dissolved, the question remained that Ko had accused Farglory of shoddy and unsafe work, so if the stadium really posed a public safety problem, the mayor should defend the city’s interests and make the developer face his responsibility, according to Hau.
He accused his successor of reaching agreements with Farglory that were not transparent enough, even though transparency and democracy had been the key promises of his 2014 electoral campaign.
Taipei Vice Mayor Teng Chia-chi was in charge of talks about the future of the Taipei Dome, Ko said. He denied recurrent reports that CTBC Financial Holding Co., Ltd. was interested in taking over the project from Farglory.