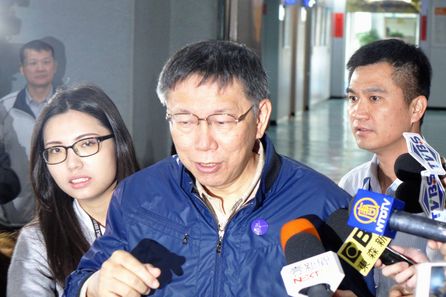 TAIPEI (Taiwan News) – Taipei City Mayor Ko Wen-je on Saturday joined the chorus of voices asking for a presidential pardon for former President Chen Shui-bian.
Before he entered politics, Ko gained prominence by leading a movement to have medical parole awarded to Chen, who was serving a 20-year sentence for corruption. The ex-president left prison in January 2015 and has since been living in Kaohsiung with his relatives.
Replying to reporters’ questions about the recent surge in demands for a pardon, Ko said that he also hoped that President Ma Ying-jeou would agree and thus contribute to an atmosphere of harmony and reconciliation between the “green” and “blue” camps in politics. However, he also added that the president was unlikely to respond to the requests.
On May 20, Democratic Progressive Party Chairwoman Tsai Ing-wen is scheduled to be sworn in as the nation’s second-ever president from the party, but Ko said he feared she would be too busy trying to lift the economy.
The mayor was reportedly planning to travel to Kaohsiung Sunday, and told reporters that if there was enough time, he would certainly visit the ex-president himself.
The momentum for a presidential pardon started when a motion in that sense was passed in the Kaohsiung City Council Friday morning. Mayor Chen Chu voiced her support, and during the afternoon, she accompanied Vice President-elect Chen Chien-jen on a visit to the ex-president and former DPP leader.