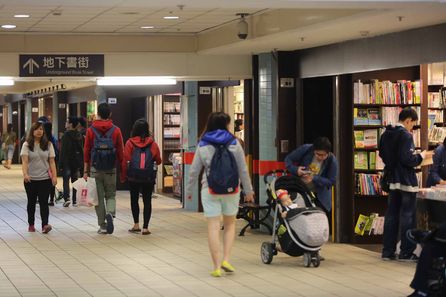 Loss making Metro mall to open to other vendors

The Taipei Rapid Transit Corporation (TRTC), which operates the Taipei Metro System, said on Tuesday that the Zhongshan Metro Mall will be open to other vendors besides bookstores when the current lease ends in March next year.

TRTC President Yen Pang-chieh said that stores at the TRTC-run Taipei Metro Mall and East Metro Mall are mostly profitable because of the bustling crowds. But the Zhongshan Metro Mall, which is an underground passageway connecting the Zhongshan and Shuanglian MRT stations and caters to bookstores, is a different story because most of the stores were in the red due to failure to bring in crowds over the years.

Actually there are many tourists above the underground mall, including the Shin Kong Mitsukoshi department stores on Nanjing East Road and many unique coffee shops, fashion accessories and apparel stores and hair salons located along the surrounding alleys, Yen said, adding that if only we could bring them to the Zhongshan Metro Mall.

When the current lease ends in March next year, the mall will be open not only to bookstores but also to light food restaurants, coffee shops and other fine culture and creativity related businesses, turning it into a composite mall that includes books, foods and general merchandise, kind of like Eslite Bookstore, Yen said.

He estimated that this change would approximately bring in an extra annual rental income of more than NT$10 million.

TRTC Business Division Director Chan Wen-tao said that the Zhongshan Metro Mall has a total of 46 store spaces, and the preferential rental is NT$877 a ping (3.3057 square meters) a month, but currently there are 11 empty store spaces, causing the TRTC to lose several million NT dollars every year.

After the current lease expires on March 31 next year, the rental for a store in the composite hall will be adjusted to NT$2,500 a ping, Chan said.