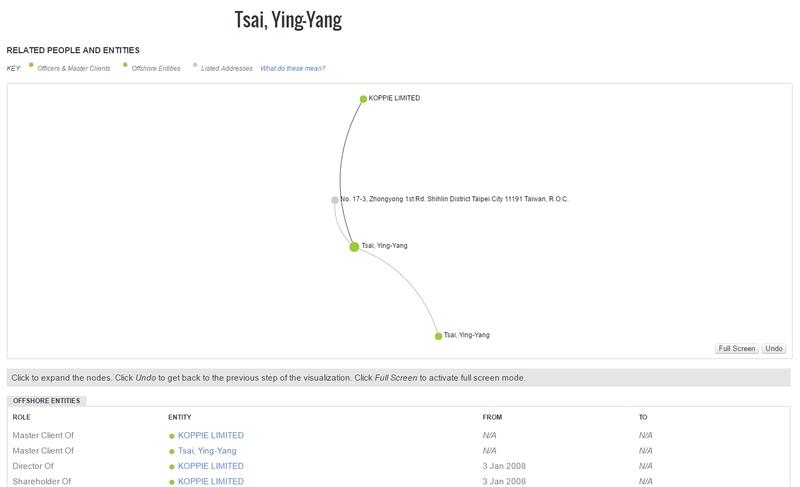 A total of 16,785 Taiwanese clients appear in the leaked Panama Papers, including President-elect Tsai Ing-wen’s brother Tsai Ying-yang, according to Chinese-language Apple Daily report on Tuesday.

Eleven million documents leaked from the secretive Panamanian law firm Mossack Fonseca show how the company has helped some clients hide their wealth from the authorities, launder money, dodge sanctions, avoid taxes and set up offshore shell companies. The documents had been passed to German newspaper Sueddeutsche Zeitung, which then shared them with the International Consortium of Investigative Journalists (ICIJ).

Since the first revelations late on Sunday a number of investigations have been launched by French, Austrian, Dutch and Australian authorities, among others.

The ICIJ has offered search service according to country and region on its official website, and a search of the data has found the name of Tsai Ing-wen’s brother “Tsai Ying-yang” appears in a document, the daily said.

The document reveals that Tsai Ying-yang has set up a company called “KOPPIE LIMITED” since January 3, 2008.

Tsai Ying-yang’s lawyer Lien Yuan-long told the media on Monday night that Tsai Ying-yang was introduced by a foreign bank to a finance-type investment, which involved setting up an offshore company. However, the contract ended after one year because the investment performance was not good, Lien said.

Lien added that he told Tsai Ying-yang, “Legally we should check” to see if the company is still operating, if so, then they should close it as soon as possible.

Tsai Ying-yang’s attitude is that “he has nothing to hide,” Lien said.

AsusTek spokesperson said the company didn’t have any contact with Mossack Fonseca and wouldn’t want to make any comment; ASE said it declared tax according to local tax regulations every year; TSMC said “no comment,” while Wei Chuan said it had never evaded tax, according to the daily.