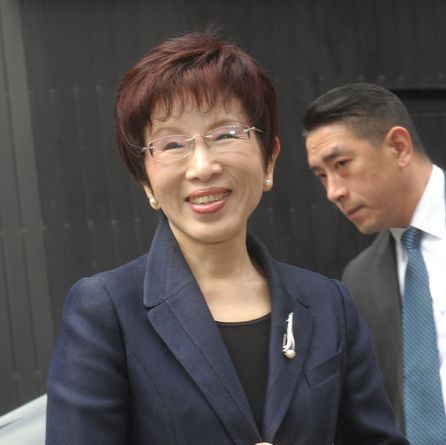 TAIPEI (Taiwan News) – Kuomintang leader Hung Hsiu-chu was likely to announce her choice of a secretary-general and other new appointments next month, reports said Tuesday
The announcements were likely to coincide with the transition of power from President Ma Ying-jeou and the KMT to President-elect Tsai Ing-wen and her Democratic Progressive Party on May 20, reports said.
Interior Minister Chen Wei-zen and Overseas Community Affairs Council Minister Steven Chen were being named in the media as potential candidate for the position of secretary-general.
In addition to a secretary-general, Hung might consider appointing as many as up to six deputy secretary-generals, according to media reports.
Hung was elected as the KMT’s first-ever female leader on March 26, with 56 percent of the vote, defeating three other candidates including acting chairwoman Huang Min-hui. She was sworn in on March 30.
Reporters asked Hung about her plans for the party when she visited the Chiang Kai-shek Mausoleum in Taoyuan City at the head of a delegation on the 41st anniversary of the president’s death. President Ma Ying-jeou and Vice President Wu Den-yih also visited, but at a separate time.
Hung, 67, said that her top appointments would reflect a regional balance and would emphasize youth. The loss of the youth vote was deemed a crucial reason for the KMT’s crushing defeat in the January 16 presidential and legislative elections.
The list of potential vice secretary-generals included three women – Chiayi City Council Speaker Hsiao Shu-li, Taitung County Council Speaker April Yao and former legislator Yang Chiung-ying – as well as ex-lawmaker Lin Kuo-cheng, reports said.
Taipei City Councilor Wang Hung-wei could expected to be named KMT spokeswoman, reports said, adding that the first batch of appointments might be made public on Wednesday.
Hung reportedly also wanted Huang to continue in her previous position as vice chairperson of the KMT, but the Chinese-language Apple Daily noted that would be difficult if Hsiao were nominated as one of the vice secretary-generals. Huang used to serve as mayor of Chiayi City and reportedly had none-too-cordial relations with Hsiao at the time, the newspaper said.
Earlier reports suggested that Hung also wanted to name a group of young party leaders to represent the KMT viewpoint on Taiwan’s many political talk shows.