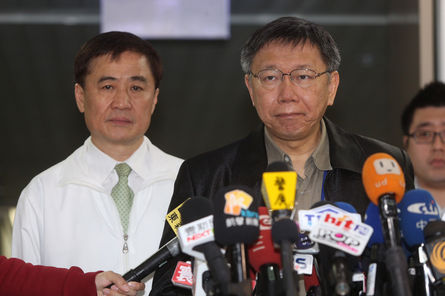 TAIPEI (Taiwan News) – Taipei City Mayor Ko Wen-je’s popularity was falling dangerously close to the public’s level of dissatisfaction, according to an opinion poll by the Want Want China Times Group published Friday.
The outspoken independent was elected by a landslide in November 2014 and took office one month later.
Support for Ko stood at 42.4 percent but dissatisfaction at 39.1 percent, the closest result since his election, said the China Times Weekly, which commissioned the poll from the group’s opinion survey company.
Since the last similar poll published on February 3, satisfaction with Ko had dropped by more than 5 percent from 47.7 percent, while dissatisfaction grew by 9 percent from 30.1 percent.
The magazine suggested that the mayor’s ratings were close to a “death cross,” the point where the negative opinions surpass the positive ones.
Ko reached his highest approval rating in the surveys on February 25 last year, precisely two months after he took office, with 69.7 percent of respondents expressing a positive opinion.
The lowest negative rating was recorded at the end of December 2014, just days after his inauguration, when only 8.3 percent of respondents voiced disapproval of the new mayor.
The latest figures suggested that Ko’s “honeymoon period” was over, the China Times Weekly wrote. The magazine attributed his sharp fall in popularity to elements such as the long-standing dispute with developer Farglory Group over the Taipei Dome, which seemed no closer to completion, and such as the recent decapitation of a little girl in the streets of the Neihu District, following the brutal murder of another girl inside a school in the Beitou District last year.
However, the poll figures show a vast difference in appreciation between traditional supporters of the Kuomintang and those of the Democratic Progressive Party, which backed Ko during the election campaign.
Among KMT supporters, only 17.6 percent approved of Ko while 66.8 percent disapproved of him. On the DPP side, the picture was virtually the opposite, with 68.3 percent backing the mayor and 22.5 percent opposing him. With people declaring themselves as neutral, there was a balance between 38.2 percent saying they were satisfied with Ko and 37.1 percent dissatisfied, the China Times Weekly reported.
The poll was conducted on March 28, resulted in 713 valid interviews and had a margin of error of 3.7 percent.