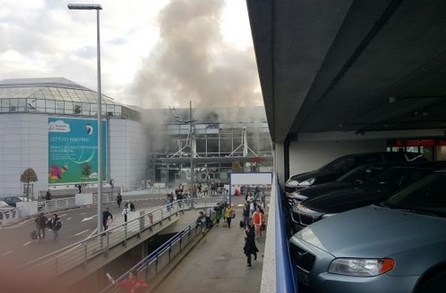 No Taiwanese affected by Brussels bombings

TAIPEI (Taiwan News) – One Taiwanese diplomat was slightly injured during a series of bombings at the airport and subway stations of the Belgian capital Brussels Tuesday, the Ministry of Foreign Affairs said.
Early Tuesday local time, or Tuesday afternoon Taiwan time, two bombs went off at Brussels Airport, according to reports killing at least a dozen people and injuring several dozens more. Shortly afterward, at least one subway station was reportedly also hit by attacks. The total death toll reached more than 30.
The Ministry of Foreign Affairs also said that a new staff member at its Brussels office was injured as he was traveling by subway on his way to work. His clothes caught fire, but he only suffered minor injuries and was accompanied home to rest, MOFA said.
Two other Taiwanese citizens were unharmed but stuck because of the shutdown of the subway system following the attacks. One Taiwanese traveler at the airport called in to say he was unharmed, though he had been forced to abandon his passport at a check-in counter, which was now off-limits, reports said.
According to the Chinese-language Apple Daily, two Taiwanese sisters were inside the departure hall when the two bombs exploded. They were unharmed, but posted pictures of the devastation online. One of the women related how she saw one of the bombs explode at a check-in counter less than 100 meter away, while a second bomb then brought parts of the ceiling down close by. They were transferred to a hangar where they received blankets to rest, the woman wrote.
Most Taiwanese tour groups travel through Schiphol Airport near Amsterdam in the Netherlands and spend only a short time in the Belgian capital, the Travel Agent Association of the Republic of China, Taiwan (TAAT), said.
Most Taiwanese tour groups visiting Belgium do so as part of a wider itinerary which also includes the Netherlands and often France. Their flights arrive or leave either at Amsterdam or in Paris, so they never visit Brussels Airport, which lies east of the city center in the town of Zaventem. Taiwanese airlines do not fly to or from Brussels.
It was not immediately known how many groups, individual travelers, students or other Taiwanese visitors were in Belgium at the moment.
A report put the number of Taiwanese students in the European country at 120, but no news had emerged of any of them being injured in the attacks. The Ministry of Education said most of the university students were studying in the city of Leuven east of Brussels, while about 20 were registered in the capital. A further 30 were exchanged students living in various cities across the country, the MOE said.