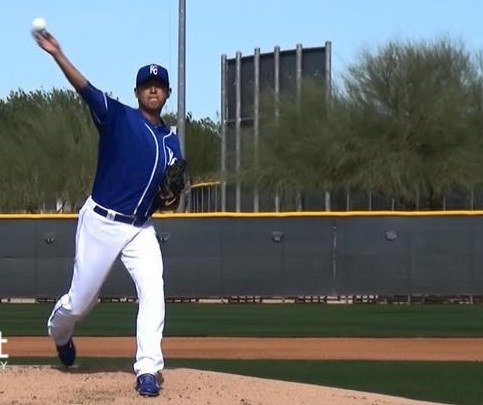 Wang Chien-ming turned in mixed results as a starting pitcher for the Royals in the final game of the Big League Weekend exhibition series at the Alamodome on Sunday as the Rangers topped the Royals, 13-6

Wang struck out the side in the first inning with movement and location as a commentator said of his performance.

But Wang experienced trouble in the next, yielding three hits, including a two-run homer to Robinson Chirinos that cleared the modest right-field wall.

In his previous four outings, he held opponents to one earned run on six hits over six innings, with five strikeouts.

"[Wang] threw fine," Royals manager Ned Yost was quoted as saying by MLB.com. "He had three strikeouts, that's more than breezing through it. Then the second inning, we made an error and then a little a fly ball that probably wouldn't have been 20 feet from the warning track goes out for a two-run homer."

Yost, who has been tightlipped about information regarding the five starting pitchers in the 2016 25-man roster, reportedly said he had been confident of the lineup.

Kansas City Star has reported that when the Royals was discussing the five starters in the roster, Dillon Gee and Wang were mentioned.

The last time Wang pitched in the Major League was 2013 when he appeared in just six games for the Blue Jays.

Wang has been set back by injuries in recent years and spent most of his time in the Minor League. His fans have been craving for his return to the Major League and repeat of his past feats when he won 19 games in back-to-back seasons in 2006-07.