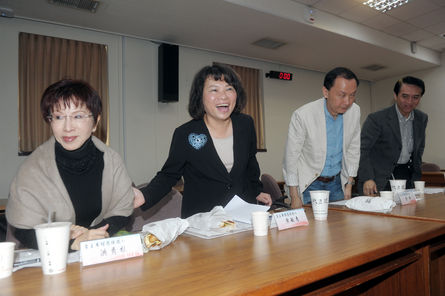 TAIPEI (Taiwan News) – The four candidates in next week’s election for chairman of the Kuomintang exchanged views on a range of issues in the second live televised presentation Saturday.
During their first presentation, on March 12, they focused on the controversial issue of the party’s allegedly illegal assets. KMT officials have put the total sum of all assets at NT$16 billion (US$508 million), a figure which has met with widespread disbelief.
On Saturday, the four candidates, acting chairwoman Huang Min-hui, former Legislative Vice Speaker Hung Hsiu-chu, Taipei City Councilor Lee Hsin and legislator Apollo Chen appeared together again for possibly the last time before the March 26 election.
They mentioned issues ranging from relations with China to Taiwan’s history and the role of the KMT.
Huang slammed the concept of “One China, the same interpretation,” which was launched last year by Hung during her short-lived presidential campaign. Disastrous opinion polls at the time showed that the public in Taiwan had no fate in the idea, Huang said. Instead, the KMT should continue its present line following the Republic of China Constitution, she said. Huang praised the so-called “1992 Consensus,” or “One China, each his own interpretation” as a realistic policy concept.
Hung said that during last year’s presidential campaign, she had been mistakenly pictured as an extreme supporter of unification. All she proposed was that both sides should respect the ROC Constitution and sit down together to work toward a peace agreement, Hung said.
Lee called on President Ma Ying-jeou to offer a public apology to the people before he left office on May 20, because that would allow the KMT to be revived and to obtain a new start.
The party paid the price for numerous mistaken policies and for Ma’s refusal to listen to public opinion and to the suggestions of his own KMT party members, Lee said.
Chen turned to the subject of Taiwan’s history, saying that if he were elected KMT chairman, he would invite representatives of other political camps to hold a debate about “transitional justice” next year on July 15, the 30th anniversary of the ending of Martial Law.
Chen accused the Democratic Progressive Party of misusing the issue of “transitional justice” to start a witch hunt against all the KMT’s past acts, even though some were also positive.
If no single candidate wins at least 50 percent of the vote on March 26, a second round will have to take place in April. Some candidates expressed the hope that such a second round would not be necessary, since the KMT had to prepare for DPP Chairwoman Tsai Ing-wen to be sworn in on May 20 with her new government team.