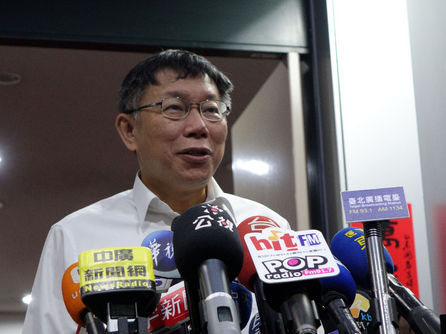 TAIPEI (Taiwan News) – Safety was still the key issue in deciding the fate of the Taipei Dome, Taipei City Mayor Ko Wen-je said Friday.
Barely hours after returning from a visit to the United States, the capital’s outspoken mayor chaired a meeting of his three deputies and key city government officials to discuss the latest developments surrounding the Taipei Dome. Work on the 40,000-seat stadium complex was halted last year amid disputes between the city and the developer, the Farglory Group.
An arbitration meeting is expected to take place next week to discuss the delays in finishing up work on the stadium. The request for the arbitration was initiated by Farglory.
The prime concern of the city government was still whether the complex in its present form was safe or not, Ko reportedly said.
A spokesman for Farglory reportedly described safety as a false issue. If Ko decided the city government should buy back the Taipei Dome from the company, he could do what he wanted with it, even keep it as a huge greenhouse, the spokesman said, adding that 40,000 spectators could sit down inside to watch the grass grow.
During his US trip, Ko had also rejected reports that the city government was preparing to hand over the project to the CTBC Financial Holding, formerly known as Chinatrust. Talking about who should take over construction and management of the Taipei Dome was completely wrong, the mayor said, because any end to existing contracts had to follow a legal procedure.