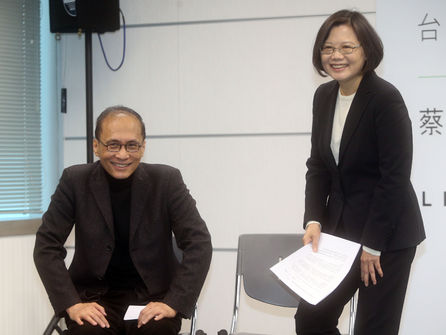 Editorial: Choice of premier to be applauded

President-elect Tsai Ing-wen made one of the most important announcements of the transition period leading up to the May 20 inauguration this week. She publicly confirmed the choice of former Finance Minister Lin Chuan as her premier.
The selection was never much of a surprise, and more of a confirmation of expectations. Lin spent the past presidential election campaign as one of Tsai’s closest advisers, and also headed the New Frontier Foundation, a think tank with close links to the Democratic Progressive Party.
The fact that the two have been cooperating closely was welcomed as a positive sign by the current holder of the position, Premier Simon Chang. General reactions to Lin’s selection were on the whole favorable, with the exception of some business leaders who see Lin as a supporter of higher taxes due to his stint as finance minister.
Once more Cabinet choices are announced, and once the new government takes office on May 20, Lin will be able to count on a honeymoon period, though it’s hard to predict how long that will last.
As the first premier of a new administration from a different party, Lin will face more problems than most of his predecessors. The economy will have to be fired up out of its lethargy, relations with China will have to be readjusted without leading to a freeze, and a wealth of domestic changes will have to achieve results in the fields of democratization and “transitional justice.”
Lin’s tasks will not be easy, and he will be in the firing line if or when things go wrong. Presidents are elected for a full four-year term, but premiers are appointed and can theoretically at least, be replaced at random, without elections.
Looking back at the past 16 years, premiers have never enjoyed a long shelf life, having to bear responsibility for disasters, mistakes, poor opinion poll ratings and election defeats.
The era of the DPP’s previous president, Chen Shui-bian, who ran the country from 2000 to 2008, counted six premiers. Tang Fei, who was a retired military man picked as a bridge between the old and the new era, barely served a year and was succeeded by veteran DPP politicians like Chang Chun-hsiung, who served twice, Yu Shyi-kun, Su Tseng-chang and Frank Hsieh.
Incumbent Premier Chang is President Ma Ying-jeou’s sixth Cabinet chief, following Liu Chao-shiuan, Sean Chen, Wu Den-yih, Jiang Yi-huah and Mao Chi-kuo.
To some extent, Lin has actually more in common with Ma’s premiers than with Chen’s. Most of the Kuomintang president’s choices were technocrats and academics, with a background similar to Lin’s, rather than elected politicians.
The new premier isn’t even a member of Tsai’s DPP, even though he has been closely associated with the party for about two decades, and he has made no attempts at running in any election.
Since being announced as Tsai’s choice though, Lin has faced accusations that he would lead a return of government officials from the Chen era. The accusation implied that because of the corruption of the ex-president’s family and entourage, which earned Chen a 20-year prison sentence,
While he served under Chen twice, as chief of city finance when Chen was mayor of Taipei City, and then again as finance minister from 2002 to 2006 under President Chen, Lin was never even remotely accused of any wrongdoing. He did his job as was expected from a government official, and was never involved in any scandal or even accused of one. It is clear that just having served in the Chen Administration should not be a barrier to continuing to serve the country in another government.
Lin’s as-yet-non-existent government team has already been dubbed a “Reform Cabinet” because after eight years of Ma Administration, there is almost no domain of government that will not face any measure of change. The economy of course is a major concern, as economic growth has all but collapsed at a level of around 1 percent. Add to that the fact that Taiwan may be an island, but an island susceptible to the outside world. As a major exporter, the country’s economy will feel the pain as its markets, especially China but also the United States, Europe, Japan and Southeast Asia perform less than expected.
President-elect Tsai has promised to correct the Ma Administration’s excessive reliance on the Chinese economy in favor of a “Go South” policy, but that will not be an easy task to achieve.
Reform will also have to affect government transparency, education, defense, disaster prevention and relief, agriculture, disease prevention, food safety, just to name a few domains which attracted negative attention during the Ma Administration.
It would therefore be wrong to expect that the Lin Cabinet could book successes on all fronts simultaneously. Unfurling the problems of the past and rearranging the country to face forward will not be a simple task and cannot be expected to be completed within a few months, not even within a few years.
Lin must be given the benefit of the doubt, as he will be caught between two eras, the KMT era now coming to an end, and the new period where the DPP controls both the Presidential Office and the Legislative Yuan for the first time. While the combination holds significant promise, the ride might not be easy, and Lin will have to bear responsibility for the promises realized but also for those not realized.
Whatever his performance, the choice of a financially literate manager such as Lin gives hope for the future of Taiwan.