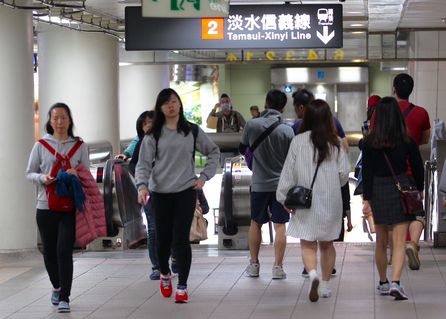 The Taipei Rapid Transit Corporation (TRTC) said on Tuesday that it’s upgrading the ticket vending and deposit (add value) machines in the Taipei Metro system by adding the Japanese and Korean languages to the operational interface, with the upgrading for all the 337 machines in the system being scheduled to be completed at the end of March.

After consulting the nationality breakdown in the statistics on visitor arrivals in Taiwan compiled by the Tourism Bureau, the TRTC decided to add Japanese and Korean languages to the machine’s operational interface, the company said.

For now, a total of 39 machines located at the Taipei Main, Zhongshan and Ximen stations have been upgraded and are already open for use, the TRTC added.

A Taipei Metro worker told of a story of how thankful a Japanese traveler was after she quickly and successfully purchased a single-journey ticket by touching the “Japanese” button on the machine’s interface and by following the Japanese directions.

The method for operating the Chinese interface remains unchanged, the TRTC said.

The 337 ticket vending and deposit machines, averaging a monthly deposit income of more than NT$300 million, are the busiest machines in the domestic transportation industry, the company added.