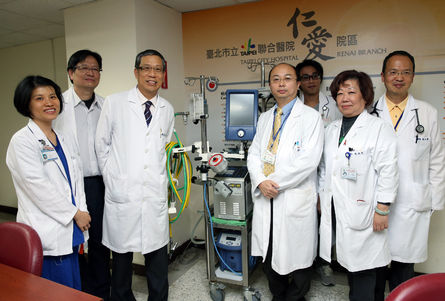 The Ministry of Health and Welfare said on Wednesday that it will coordinate and designate emergency hospitals according to front-line situations in times of epidemics, such as flu, to relax crowdedness at the hospital emergency rooms across Taiwan.

The Taiwan Society of Emergency Medicine (TSEM) paid a visit to the Ministry of Health and Welfare (MOHW) on Wednesday, during which TSEM Secretary General Yen Zui-shen said that there were at the moment more than 100 patients waiting for beds at emergency rooms across Taiwan, a number very different from the 1,010 beds the MOHW said of available at intensive care units in the country now.

Yen Zui-shen said the TSEM’s visit was made for the sake of doctors and patients at emergency rooms in the hope that the MOHW can understand the real front-line situations.

The problem of waiting for beds at emergency rooms is at its worst at medical centers across Taiwan, with Linkou Chang Gung Memorial Hospital being the worst in the Taipei area with 10 to 20 patients every day.

TSEM Chairman David Yen said that a three-point conclusion was reached after meeting with the MOHW, including admission that the 1,010 available beds at emergency rooms across Taiwan earlier announced by the MOHW was wrong, designating emergency hospitals to control epidemics and relieve crowdedness at medical centers in times of epidemics, and setting up monitor and control systems to optimize epidemic control and patient distribution.

David Yen said emergency hospitals, which are usually designated public hospitals and medical centers, are designed to care for and distribute seriously ill patients in times of epidemics, such as SARS and dengue fever.