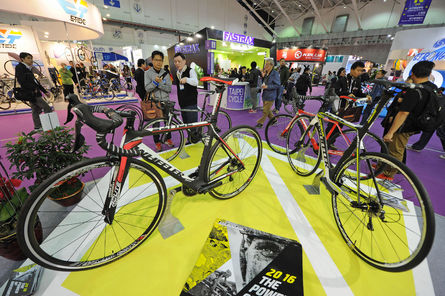 Taipei Cycle has 1,110 exhibitors, who use a total of 3,307 booths, with 2,482 local and 830 from overseas. The exhibition scale is roughly the same as last year, according to the organizer.

Tony Lo, president of the Taiwan Bicycle Association (TBA) and CEO of Giant said at a pre-show press conference on Tuesday, “I can foresee, in the next 10, 20 years, the use of the bicycle becoming explosive.”

In fact Taiwanese manufacturers have seen a rising trend already.

Exports of complete bicycles grew to 3.995 million units last year, up from 3.75 million units in 2014. The 6.5 percent increase represented a rebound from two previous years of decline, according to the TBA.

Unit prices rose 3.3 percent from US$459 in 2014 to US$474.02 last year. Overall, unit prices have skyrocketed by nearly 25 percent since 2011, indicating that the Taiwanese industry continues to meet its goal of producing high-end products, the TBA said.

The European Union remains Taiwan’s top export market, taking in 55 percent of all complete bikes, with North America the No. 2 market at 21.8 percent.

DiWaS is a showcase of innovative water sports products; while SpoMODE exhibits sportswear, fabrics and accessories such as sports bags and backpacks.