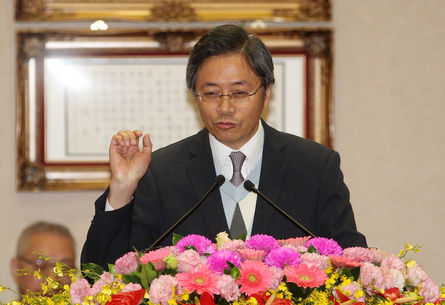 Taiwan Premier Simon Chang Thursday instructed the Council of Agriculture (COA) to stand up for the rights of Taiwanese fisherpeople in a coming fishery meeting between Taiwan and Japan in March amid media reports that Japan will try to restrict Taiwanese fishing vessels from entering a sea area to operate agreed by both sides in the last meeting.

According to media reports, it is rumored that a Japanese civil sector has suggested a possible change to the fishing areas stipulated in the Taiwan-Japan Fisheries Agreement made between the two sides more than two years ago. Reports said the Japanese intend to restrict Taiwanese fishing vessels from entering waters north of the Yaeyama Islands, which are located south of the contested Diaoyutai Islands.

The Diaoyutai Islands are simultaneously claimed by Taiwan, Japan and China.

The Suao Fishermen’s Association and local fishery groups in Yilan County have protested since hearing the news recently and asked the government to protect their fishing rights, vowing to engage in self-salvation by calling fisherpeople to surround the Diaoyutai Islands if otherwise, reports said.

During a routine meeting on Thursday, Chang reiterated his position by saying that Diaoyutai Islands are an inherent part of the territory of Republic of China (Taiwan), and instructed the COA to continue negotiation with Japan under the principle of mutual benefit and joint development.

Taiwan and Japan eventually signed a historic fisheries arrangement in 2013 after 17 years of bilateral fisheries consultations, and agreed to establish a Fisheries Committee to address issues relating to arrangements for fishing vessels to operate in the overlapping waters in the exclusive economic zones (EEZ) of both countries.

The COA said the governments of the two sides should make their best efforts to uphold the fisheries agreement and ensure the safety and fishing rights of both countries’ fishing vessels in the disputed waters.