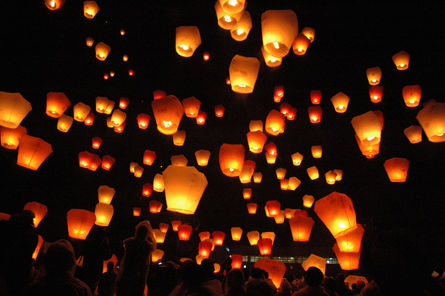 Flying lantern with fingerprints of 1,000 couples

This year, fingerprints are being used as a decorative element on the sky lanterns because everyone's fingerprints are unique, symbolizing the special nature of every wish written on the lanterns, New Taipei's Tourism and Travel Department said.

The activities at the junior high school, which starts at 6 p.m. and ends at 8:30 p.m., include concerts and the launches of a total of 1,400 lanterns in 8 installments.

The last event of the festival will be held at the Shifen Sky Lantern Square on Feb. 22, the fifteenth day of the Lunar New Year, the date of the Lantern Festival. The centerpiece of the night will be a main lantern decorated with beautiful landscape photos from around the world.

For related info, check out http://pingxiskylantern.mmhot.tw.

Each year, the sky lantern festival attracts tens of thousands of visitors to New Taipei City's Pingxi District, the only place in Taiwan where the release of sky lanterns is permitted.

In 2013, the festival was named by Fodor's Travel -- the world's largest publisher of travel guides -- as one of the world's 14 festivals a person must attend in their lifetime.