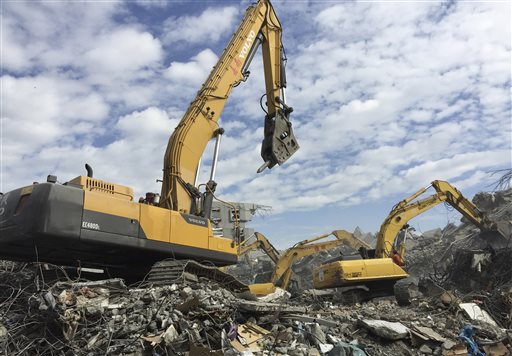 Taiwan needs to wake up to disaster management

Two days ahead of the Lunar New Year, on February 6, a 6.4-magnitude earthquake rocked Southern Taiwan, leaving 116 dead and 11 collapsed buildings in Tainan City in its wake.
The 16-story-tall Weiguan Jinlong building in the Yongkang District was one of those buildings, on its own responsible for 114 of the dead. The tragedy is not only a natural disaster, it is also a man-made calamity.
For at least a part, voters allowed local and central governments not to do anything about disaster prevention management, while also allowing politicians on central and local levels to spend budgets on minor elements instead.
During the week since the quake, netizens succeeded in locating the company responsible for the collapsed project, leading to the detention of the main developer, Lin Ming-hui. A lecture from last summer by former Interior Minister Lee Hong-yuan was shared online because he told his audience that Taiwan lacked an earthquake prevention consciousness and might one day pay dearly for that.
Lee said that since Taipei, New Taipei and Tainan faced the most serious cases of soil liquefaction, urgent “disaster-preventive urban renewal” was necessary, otherwise the soil might not be able to carry the buildings, leading to collapse and more deaths.
Lee is a professional technocrat who proffered his expert opinions, but his ideas were not taken up due to politics.
If there is no money and no strong determinations, one should not be talking about disaster prevention management. Local government budgets will be spent on places where voters can see them come election time, such as social welfare payments and firework shows. The local governments are unable to bear the costs of long-term preventive work. As Lee said, the central government does not have the right mind for preventing disasters, and no budgets nor policies, while the academic world will not have the right departments nor the right cooperation with the private sector.
After the February 6 earthquake, Lee wrote to the media to describe disaster victims as an undetermined group of citizens without any votes. Taiwan’s problem was that political professionalism was gone, and the right voices were unable to make themselves heard. Local political leaders could improve their public image and popularity ratings by spending money and handing out benefits, while central government officials became weak and unable to present long-term plans for the country.
If Taiwan is unable to adopt a disaster prevention consciousness and to stay on course even when it faces the first political difficulty, then this kind of tragedy will continue to occur.