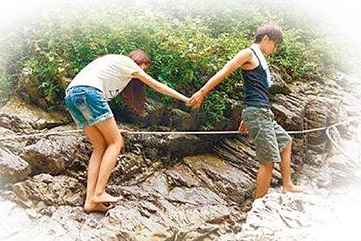 Couple embracing each other to their death

A college couple found dead embracing each other at the collapsed building in Taiwan’s southwestern city of Tainan from Wednesday’s rescue effort made headlines in local dailies on Thursday.

Tsai Meng-chia and his girlfriend, Huang Ru-hsing, both 21, were students of the Kun Shan University, with the former studying electronics and the latter studying fashion.

On the fifth day after the Feb. 6 earthquake, rescuers found Tsai’s hand and foot, and thereafter began to dig out his body carefully from the rubble as the body had some degree of decomposition. To the rescuers’ amazement, Tsai was holding Huang tightly beneath him to protect her from the collapsing pillars and broken walls, which toppled on top of them. A dog, apparently their pet, was also found dead not far from them.

Media reports said rescuers had to suppress grief to uncover and transport the couple’s bodies, which took two hours.

Reports also quoted Tsai’s and Huang’s classmates as saying that they were deeply in love with each other when they were alive and that they were seen holding hands during an outing.

Tsai was quoted saying in a Facebook post, “[I] wish [our] holding hands will last for a life time!”

Tsai was seen carrying out his words to his death.