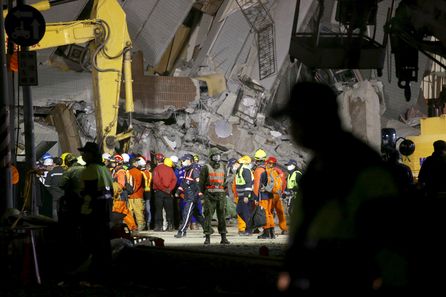 Rescuers race past 72 hours to save survivors

Rescuers deployed heavy machinery Tuesday in a renewed effort to locate more than 120 people trapped in the rubble of a collapsed apartment complex as the 72-hour "golden window" for finding survivors just passed.

Tainan Mayor William Lai gave rescue teams the “go” sign at 4 a.m. to expedite the rescue effort because time is running out to save any of the people who remain trapped and might still be alive.

According to authorities, rescuers have found signs of life in Blocks F and E among the Weiguan Jinlong debris, and are currently working to locate the survivors.

There have been some dramatic rescues, including an eight-year-old girl and three others pulled from the wreckage Monday.

The mayor ordered rescuers to start using diggers and extractors to remove giant concrete slabs to better detect signs of life, which they have found in three different areas.

“Rescuers have found no signs of life in Blocks I and G. Our remaining hopes are in Blocks F and E,” Lai said in the morning.

The 6.4 magnitude quake in Tainan on Saturday has so far left 38 people dead and more than 500 injured, and the death toll is likely to rise as rescue efforts continue into Tuesday.

"We will not leave anyone behind,” he said, adding that although the golden 72 hours of rescue has since passed, he believes miracles do happen.