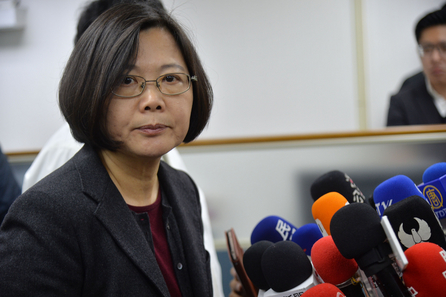 Democratic Progressive Party (DPP) Chairperson and president-elect Tsai Ing-wen on Wednesday asked the DPP caucus to watch out for some controversial policies the caretaker government has been pushing forward lest they should become a nagging problem during the four-month power transition period.

Noting that the new Legislature will convene on Feb. 19, but the new government won’t be sworn in until May 20, Tsai bade the party’s caucus closely watch the caretaker Cabinet, invite responsible administrative agencies to make status reports on ongoing controversial policies, and convey new public opinions to them. The existence of too many controversial policies will only add difficulty to the power transition process, Tsai added.

The party’s Central Committee and party caucus will hold a “consensus camp for legislators,” inviting DPP legislators to exchange views on priority bills with an eye to realizing them through legislative action, Tsai said.

Tsai pleaded with caucus members, especially first-time legislators, to make sure to participate in the camp.

DPP spokesperson Juan Chao-hsiung said the time to hold the consensus camp is still under discussion, but it will take place after the Chinese New Year and before Feb. 19 when the new legislative session begins.

Issues such as how the Legislature should be operated and how committees should coordinate with each other in the future will be put forward and discussed in the camp, Juan added.

In response to Tsai's call, Premier Simon Chang and Legislative Speaker Su Jia-chyuan reached a consensus Wednesday that the Executive Yuan will hold off on sending controversial draft bills from the last Legislature to the new Legislature.

Chang, who was sworn in Feb. 1 along with his Cabinet, called on Su for talks on government operations in the remaining four months before Tsai assumes office on May 20.

The premier said the Cabinet was ready to re-submit all 149 draft bills from the last Legislature to the new one. But the legislators said controversial draft bills should be put on hold.