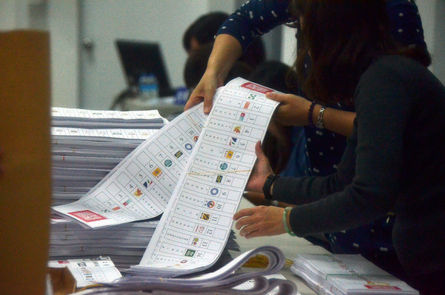 The Kuomintang outlined a post-election report Wednesday attributing its devastating defeat in the January 16 general elections to political infighting, the military housing scandal, and the change of presidential candidacy.

Due to the absence of its Acting Chairperson Huang Min-hui, the KMT’s Central Standing Committee (CSC) voted committee member Liu Da-bei as its temporary chairman of the day, to mediate a review meeting on post-election results.

The party admitted its failure, saying the outcome "fell short of our party's expectations and goals."

Liu said the fact that the KMT won only 46 of the legislative seats (including at-large seats) could be described as a “major setback.”

“We have let supporters down because of our failure to act in unity, marked by internal conflicts and discrepant political policies,” he said, adding that the major element to its landslide defeat was due to the party’s sudden candidacy change, a move deemed by voters as totally “undemocratic.”

The setback prompted Mao Chi-kuo and KMT’s Eric Chu, both of whom former premier and party chairman, to resign to take full responsibility for the defeat.

"The election results have showed that voters are not satisfied with the KMT and its governance," Liu said, concluding that they must learn from the lesson of the defeat and keep in mind the desires and feelings of the public, who will withdraw their support if dissatisfied.

Hit hard by series of protests against a services trade pact signed with Beijing, food safety scare, missteps in education reform, and income inequality during KMT’s eight years of reign, voters on Taiwan eventually had the former ruling party pay a heavy price for its incompetency.