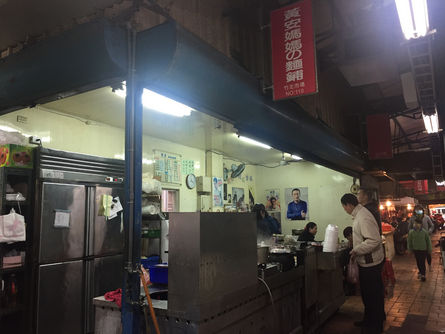 Entertainer Huang An, who has incited public indignation by accusing other entertainers of holding the political view of Taiwan independence, will not return to Taiwan for the Chinese New Year, according to local media reports.

After having made an announcement on his Sina Weibo page that he would return to Taiwan on Feb. 3, Huang turned low-key, and even his agency would not reveal information related to his whereabouts.

Latest media reports said Huang will temporarily not come back to Taiwan, but instead his mother will go to China to visit him.

After the Chou Tzu-yu incident, the media has turned attention to the noodles eatery Huang’s mother runs at a market in Zhubei City, Hsinchu County. According to the neighboring store owners and customers, Huang’s elder sister has taken over the business of the eatery and Huang’s mother has not been seen working there for quite a while.

However, when asked about whether Huang was coming back to Taiwan, Huang’s sister was tight-lipped about Huang’s or her mother’s whereabouts while busily attending to guests.

According to information from the National Immigration Agency and other sources, Huang’s name has not appeared in any guest list of flights from China to Taiwan on Wednesday morning.

Huang has incited public indignation by accusing Chou Tzu-yu, a Taiwanese singer and member of the multi-national Korean pop group Twice, of being a Taiwanese independence activist after Chou and her band mates appeared on the Korean variety show in November 2015, introducing herself from Taiwan and holding the flag of the Republic of China (Taiwan) alongside that of South Korea.

The flag of Japan was also shown representing the nationality of some of the band's other members.

Soon after, Twice was barred from Chinese television and Chou was pulled off from her endorsement with Chinese communications equipment vendor Huawei.

On January 15, 2016, the day before Taiwan’s general election, Chou’s company, JYP Entertainment, released a video showing Chou reading an apology, which said in part: “There is only one China, the two sides of the strait are one, and I have always felt proud to be Chinese. I feel extremely apologetic to my company and to Internet friends on both sides of the strait for the hurt that I have caused, and I also feel very guilty.”