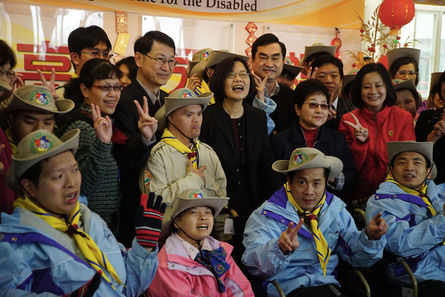 President-elect Tsai Ing-wen extended her Lunar New Year wishes to residents of the Yangming Home for the Disabled in Taipei, while handing them red envelopes in anticipation of the upcoming festivities over the weekend, reports said Wednesday.

In return, they gave Tsai an array of home-grown vegetables and hand-made soap as tokens of appreciation, thanking her for the impromptu visit.

The president-elect was met with members of the local media, who asked if Lin Chuan, former minister of finance, would become her choice of premier after she steps into office.

Speculation intensified after Lin, long rumored to be Tsai’s top pick in premiership in her incoming administration, was included in the government’s transition team on Monday.

Without responding, Tsai entered the building to be warmly welcomed by residents of the home, including Taipei Deputy Mayor Teng Chia-chi, who expressed his gratitude on behalf of the city government for her visit.

“On behalf of Mayor Ko, I must also apologize for his absence as he couldn’t make it here today given his tight schedule,” Teng said.

Tsai vowed that her administration will harbor more investments in the nation’s social welfare programs, including the establishment of hospitals and institutions for those that need special care.

“The government is committed to enhancing the well-being of the disabled and promoting equal opportunities for all members of society,” she said, citing that people with special needs ought to enjoy equal treatment like any other citizens of the nation.