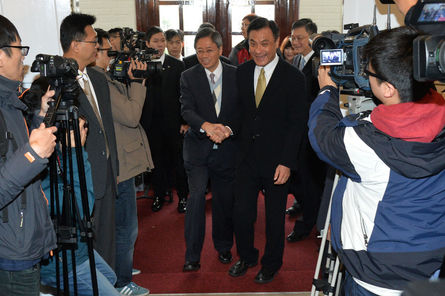 LY calls on EY to prioritize drafts on economy

Legislative Speaker Su Jia-chyuan and lawmakers from the Democratic Progressive Party and Kuomintang advised officials from the Executive Yuan to prioritize the nation’s economy and social welfare before other propositions, reports said Wednesday.

“We urge the Cabinet to submit economy-related priority draft proposals for legislative review,” Su said, noting that other draft items of legislation can be pushed back for the time being.

Newly-appointed Premier Simon Chang, including various Cabinet officials, led a visit to the Legislative Yuan in the morning for a 30-minute closed-door discussion with Su and party lawmakers.

The meeting also included legislators from the New Power Party, the People First Party, and the Kuomintang.

Su said the Cabinet’s focus should be “on revitalizing the economy, and taking care of the less privileged and welfare of the people,” by means of such legislation as their priority draft.

“As the nation’s legislative body, the public expects us to act now during this 3-month transitional period,” he explained, disclosing to reporters during a post-press conference that the two sides have discussed ways for future collaboration as the new government prepares to take function.

The Premier pointed out in the morning that the Cabinet had initially planned to submit the 149 proposals drafted by his predecessors for legislation on Monday, but the legislature however responded that given the short amount of time before the transition, his Cabinet was asked to filter out some of the controversial bills to be reviewed at a later date.

“We already did that, and have submitted only the priority drafts for legislation,” Chang clarified to press reporters in the morning.

The Premier nevertheless hoped that the proposals can be expedited as soon as possible, saying both government branches should work out mutual ways to minimize the review process in a more efficient manner.

“I assure the public that the legislative branch would cooperate with the executive branch to pass effective policies, and we will not let the people down,” Su concluded.