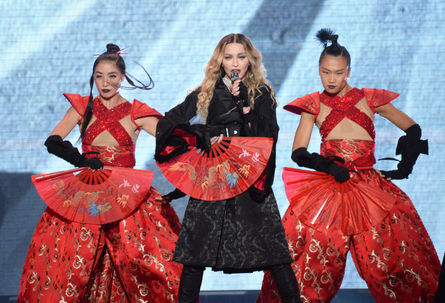 Pop signer Madonna Louise Ciccone, 57, arrived in Taipei by private jet on Monday night for her Rebel Heart Tour’s first stop in Asia, which includes two performances on Thursday and Saturday nights at the Taipei Arena.

Coming to Taipei for the first time, Madonna said in a Facebook post on Tuesday, “We are coming to get you TAI-PEI!!”

Media reports said Madonna lowered the car window and waved to reporters on her way to the Mandarin Oriental Hotel, where she is said to be staying.

Arriving three days before the scheduled concert, Madonna will stay in Taiwan for at least a week.

Well-known local singers Jolin Tsai and Sophia Fang have said they will go to the concert to watch their idol.