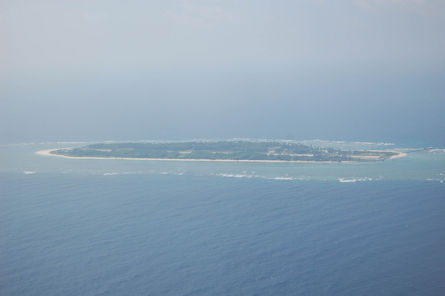 President Ma Ying-jeou’s trip to Taiping Island (also known as Itu Aba Island) last week has been widely seen by observers as a hoax and pretense to jot his name down in history books. But truth be known, if Ma’s intentions were simply to reinforce Taiwan’s sovereignty over the island and boost morale for the Coast Guard personnel stationed there, – as he claimed prior to the trip – why didn’t he carry out his “grandiosity” to Taiping years ago?

The initiative has since received backlash from neighboring countries in the South China Sea, an island that is also claimed all or in part by China, the Philippines, Vietnam, Malaysia, Brunei and Indonesia. Even the United States government, a strong backer of Taiwan, criticized Ma’s trip as extremely unhelpful and “does not contribute to the peaceful resolution of disputes in the South China Sea.”

Yes, it’s already a given that Taiping belongs to the Republic of China, as no self-respecting, dignified Taiwanese will say otherwise. But the point being that Ma’s intentions can no longer be justified because majority of the people have long lost their faith and trust in him, including his Kuomintang cohorts (as evidenced through the general elections last month.) To many, Ma’s showboating in Taiping can no longer be rationalized – other than wasting taxpayers’ money – at a time when national coffers are seriously in debts.

To add more spice to the irony, he did not practice what he preached, back when former president Chen Shui-bian also carried out his Taiping trip during the last phase of his tenure in 2008. At the time, Ma was highly critical of Chen’s publicity stunt, slamming the latter that he should have focused on maintaining social order and national security and preparing for a transition of power.

But what does this make Ma now? To political pundits, it can only be viewed as another slap in the face after losing the elections last month.

Before the island escapade, Ma shunned a rebuke from the U.S. saying the R.O.C. did not need its permission to visit Taiping Island. Dubbed the “lame duck” president who is already the subject of US ire, observers seemingly believe that Ma has little to lose with Washington at this point. Although just three months shy of stepping down from office, the move has led them to believe that it was a deliberate policy carved out by Ma, as he and Beijing obviously see eye to eye on South China Sea territories, where either side could mutually reinforce their “Chinese” claims in the area.

What’s more, there are also rumors that say the real purpose of Ma’s trip was to please China because he is planning to retire there after May. Funnily enough, China did not bark up the tree this time round, citing its usual “One China, Same People” propaganda, according to Taiwan’s Mainland Affairs Council (MAC).

In short, it’s not to say that an R.O.C. president shouldn’t (or couldn’t) visit Taiping, but the timing was simply wrong, to say the least.

As evidenced through the 2016 general elections, results have shown that the people have voted for the hope of an improved economy, something which Ma and the KMT failed miserably to deliver in their eight years of reign.

At a time when the nation’s economy is down in the dumps, it’s also fair to say that national ideologies are not necessarily on top of everyone’s agenda. Tsai understood this, and chose not to send a DPP representative to chaperon Ma on the island getaway. Rather than showboating, she took a more pragmatic approach, stating that although she supported Taiwan’s sovereignty claims over Taiping, the disputes should be solved according to international law under UNCLOS.

According to former U.S. diplomat William Stanton, Tsai is differentiating her views from that of Ma, and putting herself more in accord with a regional consensus. As director of the Center for Asia Policy at the National Tsing Hua University in Taiwan, Stanton said Ma’s provocative visit was to “brag” that he managed to replant the R.O.C. flag on Taiping.

Similar to the hoax played out by Ma on his meeting with Chinese President Xi Jinping in Singapore last November, let’s hope that Tsai will not turn into another self-absorbed, ego-centric politician, or she will likely pay the same price as the KMT did in the next elections.