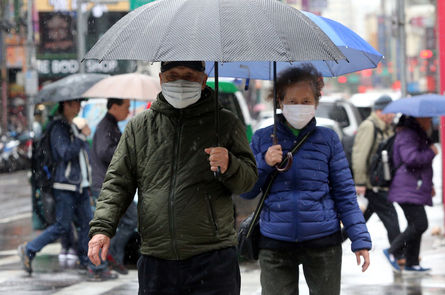 Mercury could drop to 9 degrees on New Year's Eve: CWB

The cold front will arrive on Feb. 5 and remain over Taiwan until Feb. 8, the bureau said.

The chilly weather brought by the cold front will be exacerbated by radiative cooling -- the radiation of heat from the ground at night -- the bureau said. Radiative cooling will intensify starting on Feb. 7 as the humidity decreases, pushing temperatures in parts of northern and northeastern Taiwan below 10 degrees Celsius at night and during early morning hours, according to the bureau.

The bureau forecast that the weather will gradually warm up during the day on Feb. 8, but it warned people of big differences between day and night temperatures, especially in central and southern Taiwan, where the difference could reach 10 degrees. (By Wang Shu-fen and Y.F. Low)