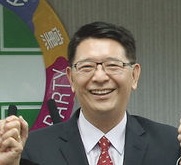 Su was elected as legislative speaker with 74 votes in the 113-seat Legislature on Monday and sworn in on the same day.

Su said that Lin originally planned to take a break after losing the Jan. 16 legislative election but agreed to take the post out of a sense of responsibility.

Lin was familiar with the operation of the Legislature as a veteran legislator, Su added.

Lin served four consecutive terms in the Legislature from 1989. He has been championing the cause of children’s welfare and has served as chairman of the Child Welfare League Foundation and Jing Chuan Child Safety Foundation.

Lin became the youngest legislator at the age of 31 on behalf of the Kuomintang (KMT) and his party membership was revoked in 2001 as he decided to vie for a legislative seat against the party's plan. Lin later joined the TSU out of his intimacy with former President Lee Teng-hui.

Noting that Lin is a person of integrity and good image, Su said he would like to make use of Lin’s talent to push for legislative reform.