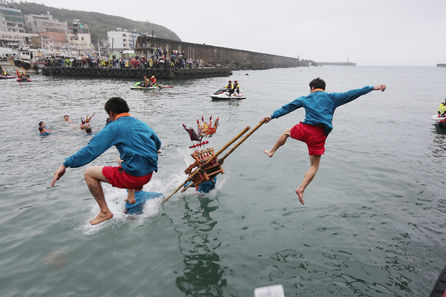 The century-old Yehliu Cleansing of the Harbor Festival, a three-day event to kick off Feb. 20 (Jan. 13 in the lunar calendar), will have an international flavor this year as more foreigners have registered to participate in its Feb. 21 “sea jumping” activity. The festival will take place at Yehliu’s Baoan Temple, Wanli District, New Taipei City. The annual ritual sees believers jump into the sea to cleanse themselves of bad luck and get blessing from local deities. Noting that the Yehliu Cleansing of the Harbor Festival is the most celebrated festival in New Taipei City besides the Pingxi Sky Lantern Festival, New Taipei City Deputy Mayor Hou You-yi said during a press conference on Monday that the highlight of the harbor cleansing festival has been the sea jumping activity. And this year's sea jumping event is open to all Taiwanese people and foreigners as well in the hope of letting more people participate in this healthy and meaningful activity, Hou added. Sea jumping participants will be rewarded with a certificate of participation, a towel, a hot spring coupon and a fish-shaped wood seal for good luck, organizers said.

Many swimmers across Taiwan as well as foreigners have signed up for this year’s sea jumping. Foreigners include Swedish soap opera actor Martin Ferm and some Japanese people. Jumping into the cold water after heating in a dry heat room or steam room is a popular Swedish activity, Ferm said. In Japan, there is a religious belief that it is important to cleanse the body and mind with clean water at the start of the New Year. So Japanese people are seen dipping into cold water in winter. Another of the rituals associated with the festival is walking over fire, but the organizers will have a special setup to let people walk on fire and symbolically get rid of bad luck without getting burned. Other special activities of the harbor cleansing festival include the fortune telling paper that tells fortune after being dipped into a bowl of sea water as well as the giving away of 1,000 fish-shaped wood seals for good luck to activity participants every day during the festival. These are just some of the events to be experienced from Feb. 20 to Feb. 22. In addition, the century-old traditional rituals will be performed on Feb. 22. In one of the main rituals, devotees take the local deities, make a running charge off the harbor dock and swim to another port roughly 100m away. After the swim, they move onto the “firewalking” ritual, walking barefooted over a bed of smoldering embers made from wood chips and popping firecrackers while carrying the deities.