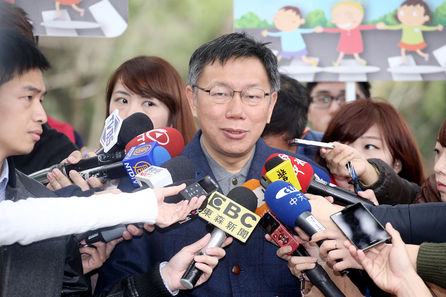 Traffic enforcement to go on as usual: Ko

With the approach of the Lunar New Year holidays merely a week away, Taipei Mayor Ko Wen-je announced Monday that the city government has set up a specialized task force to handle traffic-related issues during the nine-day off period.

“Illegal parking will still be enforced in Taipei during the holiday break,” Ko said, calling on officers to carry on with their normal routine of handing out traffic fines to non law-abiding drivers.

His comments came during a groundbreaking ceremony for the tear down of Zhongxiao Bridge, which is located near Taipei Railway Station at the intersection of Zhongxiao West road and Zhonghua road.

Since taking office in 2014, Ko has vowed to improve the city’s traffic condition.

Removal of the bridge is part of a greater plan to restore heritage sites around Beimen. In the 1970s, the Zhongxiao Bridge connection ramp was built to bypass existing railroad tracks in Taipei, with completion in 1982. As those tracks have now been shifted underground, calls for the ramp's removal have been proposed. The city plans to use reclaimed space after the bridge's removal to create a square around Beimen.