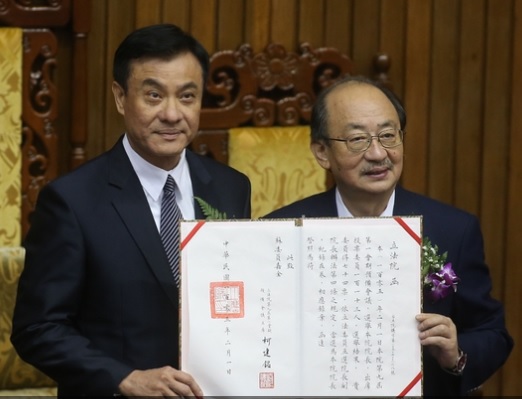 Su Jia-chyuan of the Democratic Progressive Party announced Monday that he will present a report on the outcome of his nomination process to president-elect Tsai Ing-wen in due course, reports said.

Su was elected as speaker of the Legislative Yuan in the morning with 74 of the total votes, after his party won an absolute majority in the 113-seat Legislature for the first time.

With his election, Su has become the first DPP member to preside over Taiwan's top lawmaking body. He succeeded Wang Jin-pyng of the Kuomintang, who has served as legislative speaker for a record 17 years.

The speakership election was held after lawmakers were sworn in earlier in the day to begin their four-year terms.

“I am sincerely grateful to all of the legislative members for their guidance and support,” Su said during a post press conference in the morning.

“Let’s all work on the nation’s interests and build a better future for the people,” he said.

Su again vowed to the public that he will not attend party events, and will not be present in negotiations between political parties. Most importantly, he added that he will not stump for party nominees in elections.

As the nation’s first-ever transition of power within the legislature, Su told reporters that the people have great expectations of the new upcoming government, adding that he will do his utmost to mediate between different political factors without any underlining prejudice or bias.

“What needs to be done [reform] will be dealt with in a transparent, efficient manner,” Su affirmed.

Su is a former minister of the interior and DPP secretary-general who served as a legislator from Pingtung County for two terms from 1992 to 1997 and was selected this year by his party to fill one of its legislator-at-large seats.

He is widely seen as a close ally of the president-elect and is expected to spearhead reforms of the Legislative Yuan.