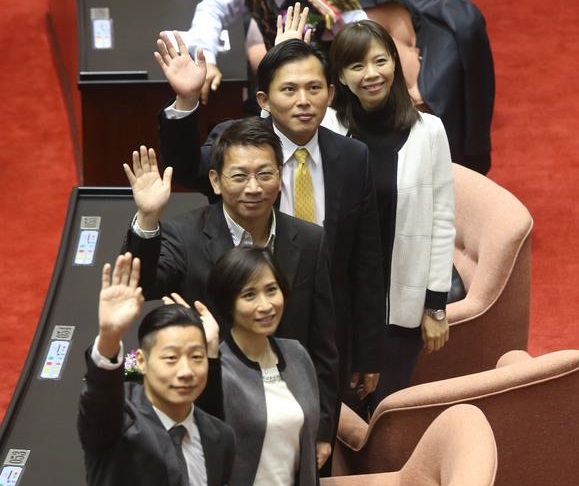 The five elected New Power Party legislators were sworn in for the first time in Taiwan’s history, making them the third largest party at the Legislative Yuan after the Democratic Progressive Party which won 68 seats, and the Kuomintang with 35.

“The experience is as surreal as it gets,” Huang said, explaining that the last time he had to break into the legislative building alongside groups of protestors, an event which was later known as the “Sunflower Movement.”

"But this time round, I walked the red carpet," he grinned.

Huang entered the public arena in 2014 as a leader of the "Sunflower Movement" that was protesting against a trade-in-services agreement with China. He even quit his job at Academia Sinica last year to pursue a political career.

The other NPP spotlight was on Freddy Lim, the lead vocalist of the heavy-metal band Chthonic, who was also sworn in for the first time at the legislature.

“I hope I’m able to successfully enter the Education and Culture Committee,” Lim said, adding that with his strong influence in local culture, he believes he can help improve the nation’s cultural developments.

Another political rookie is Hung Tzu-yung, also of the NPP, who defeated veteran KMT Legislator Yang Chiung-Ying to win a seat in the central city of Taichung.

Hung is the sister of Hung Chung-chiu, a conscript solider whose high-profile death in 2013 turned the spotlight on social justice in Taiwan. "My aim is to bring about reforms to the Social Welfare and Environmental Hygiene Committee,” Hung quoted before the swear in on Monday, adding that she hopes her brother’s tragic fate will not repeat itself on others in the foreseeable future.