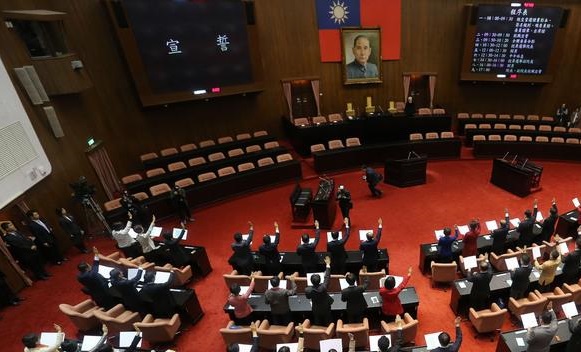 All 113 members of the 9th Legislative Yuan were sworn in at 9:37 a.m. Monday as legislators took their oath of office before Grand Justice Huang Mao-jung, who presided over the inaugural ceremony in Taipei.

The 113 lawmakers will begin a new four-year term with the first legislative session scheduled for late February.

For the first time in Taiwan’s history, the legislative body will be controlled by the Democratic Progressive Party, who won an absolute majority in the general elections on January 16.

The speaker and his deputy will be elected later in the day, where Former DPP secretary-general Su Jia-chyuan and party legislator Tsai Chi-chang will both compete for the legislature’s two leading vacancies with Kuomintang caucus whip Lai Shyh-bao and legislator-elect William Tseng.

The casting of ballots will end at 12 p.m., after which the votes will be counted.

The winner of the speaker election will succeed Wang Jin-pyng of the KMT, who has served as legislative speaker for a record 17 years.