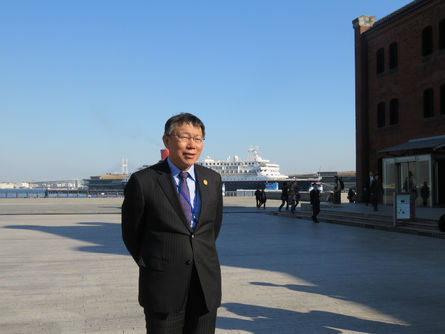 Residents of Shezi, a 290-hectare sandbar at the confluence of the Keelung River and Tamsui River in Taipei, will decide the community’s future course of development in a vote between February 27 to 28, with voters able to cast ballots or vote online, reports said Sunday.

Taipei Mayor Ko Wen-je disclosed in the morning that since it will be the first plebiscite held in the city, he is calling on to its residents to take an active approach to the upcoming ballot, dubbed “I-voting.”

“The development plans and discussions will be put out in the open for public review,” Ko said, cautioning those involved in the project not to dwell on striking it rich but to think about the long-term benefits for residents in Shezi.

Due to Shezi's geology and the threat of flooding, construction of new buildings has been banned there since 1970 and basic infrastructure, including electricity and water supply systems, has lagged far behind other parts of the city.

The city has made many promises since the 1990s to build landfills and dyke walls, enable residents to renovate their houses and give them better access to electricity and running water.

Those development plans, however, have remained on the drawing board for two decades.

The I-voting scheme was supposed to be staged on December 12 last year, but the date was pushed back to January 16 due to complaints by Shezi residents that the initiative was implemented too hastily. However, the mayor again postponed the plebiscite to late February due to the approach of the general elections in Taiwan, which was held on January 16.

Registered residents of Shezi and owners of properties in the region who are aged 18 or over and have registered at the district office no later than two months prior to the voting date are eligible to participate in the voting.

An estimated 14,487 people will be eligible to vote, reports said.