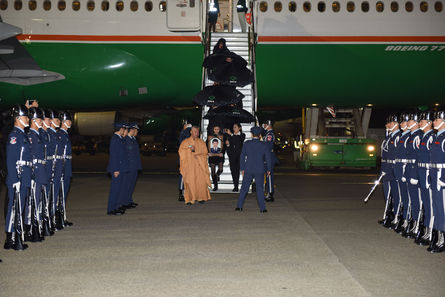 The ashes of a fallen Republic of China Air Force pilot was returned to the Chiayi Air Force Base where a funeral scheduled for him took place, reports said Sunday.

Pilots assigned to the 455th Tactical Fighter Wing performed a “Missing Man Flyover” formation during a wreath-laying ceremony held at the Chiayi base in memory of Major Kao Ting-cheng, who was killed in an F-16 Fighting Falcon while taking part in a training exercise in the U.S. state of Arizona on January 21.

Kao, 31, was a 2007 graduate of the Air Force Academy and had logged 865 flight hours. He was dispatched to the Luke Air Force Base in Arizona for F-16 fighter jet pilot training.

The Major’s grieving family arrived at the Taiwan Taoyuan International Airport in the early morning from the United States carrying Kao's ashes, while Air Force Commander General Shen Yi-ming, members of the Air Force Honor Guards and Kao's classmates received the family at the airport apron.

President Ma Ying-jeou also attended the funeral later in the day to honor the deceased pilot.

The US$25 million jet was assigned to the 56th Fighter Wing at Luke Air Force Base in the U.S., which is responsible for training on F-16 and F-35 fighters. The accident marked the third crash of an F-16 from the base since 2013.

The cause of the crash is now pending investigation.