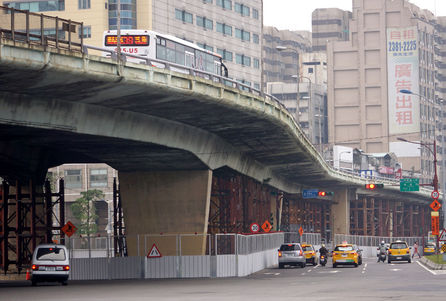 Zhongziao Bridge to be demolished: reports

Taipei Mayor Ko Wen-je announced Sunday that the demolition of the Zhongxiao Bridge will be carried out between February 7 to 14, confirming that he would personally oversee the completion of the project.

The tear down will take place during the Lunar New Year holiday, a project which is part of the extensive infrastructure developments for the western part of the city where transportation routes surrounding Beimen will undergo major adjustments, and the connection ramp near Beimen will also be removed.

Original time projections for the demolition were three months, but Ko decided to reduce the project duration to eight days due to traffic concerns.

“The duration was shortened to minimize public complaints about traffic congestions in surrounding areas,” he said.

Ko added that the engineers working on the demolition during the holiday period will be paid double in accordance to the Labor Law, revealing to reporters that the city government would have to foot a surplus of NT$60 million (US$2 million) for the project.

Removal of the bridge is part of a greater plan to restore heritage sites around Beimen. In the 1970s, the Zhongxiao Bridge connection ramp was built to bypass existing railroad tracks in Taipei, with completion in 1982. As those tracks have now been shifted underground, calls for the ramp's removal have been proposed. The city plans to use reclaimed space after the bridge's removal to create a square around Beimen.