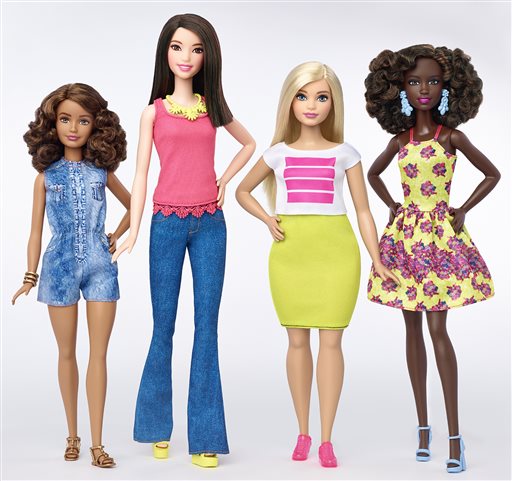 The new line of Barbie dolls will come with three new body types – curvy, tall, and petite, following the line that comes in with varying skin tone introduced last year.

Mattel spokeswomen Michelle Chidoni said the product is evolving to “offer more choices” to make “the line more reflective of the world girls see around them,” according to media reports.

“We believe we have a responsibility to girls and parents to reflect a broader view of beauty,” said Evelyn Mazzocco, senior vice president and Barbie’s global general manager.

The Barbie manufacturer has been criticized over the years for the product’s unrealistic body type and its overemphasis on female beauty. It has been widely accepted the assumptions linking Barbie to young girl’s mental heath issues.

As iconic as it may be, the sales for Barbie dolls have dropped in recent years, which was said to be another main reason that prompted the Barbie manufacturer to make such changes. According to media reports, Barbie sales fell 14 percent in the most recently reported quarter, with worldwide sales falling every year since 2012.

The announcement introducing Barbie’s new body types has received both positive and negative reactions. Dr. Kelli Harding, assistant professor of psychiatry at Columbia University Medical Center, for instance, said in a New York Times report that she strongly supports the new change in the iconic doll. “For a little girl, it’s important to have diversity in what they’re playing with,” said Dr. Harding.

On the other hand, more were still unhappy with the American toy-company’s once most popular brand, saying that despite the company’s new strategy, it does not change the fact that Barbie dolls still over-emphasize female beauty.