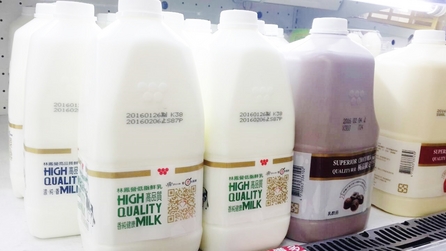 Milk a luxury good in Taiwan?

In Sainsbury’s, the second largest chain of supermarkets in the United Kingdom, one of the nations with the highest commodity prices, a two-liter whole milk costs £1, equivalent to approximately NT$49. On the other hand, a 1.85-liter whole milk costs a whopping NT$145 in Taiwan, a place where per capita income was only half of that of the UK’s.

On Thursday, the Consumers’ Foundation (CF) called for revamped regulations of domestic milk products, as consumers’ interests were hurt by the unreasonable milk prices.

In a press release Thursday, the CF revealed that the wholesale purchase price for domestically produced fresh milk is around NT$22 to NT$30 per liter. However, the retail prices jumped to as high as NT$80 to NT$90, two to three times higher than that of the fresh milk prices in European and U.S. markets.

The unreasonable price discrepancies have prompted the CF to call on the government to take action against fair trade violation. The exorbitant milk prices in Taiwan is the reason why imported milk products are still able to compete with local selections, and is not in the consumers’ interest, said the CF.

The CF then slammed local milk manufacturers for profiting from such wide price discrepancies.

Several local manufacturers in their defense have cried out over such accusation. Uni-President Enterprises Corp., the largest milk manufacturer in Taiwan by market share, for instance, said the gross profit margin for fresh milk is actually low.

Wei Chuan Foods Co., in tune with Uni-President, denied outrageous profits from milk productions, saying that the profits were usually eaten up by the high slotting fees.

Problems of low pay and high commodity prices are no news for Taiwanese consumers. Nevertheless, the government should take on more responsibility to guard against unfair trade practices such as distorted milk prices, as the right to food has been recognized as a basic human right. The government should bear in mind that the poor stand to be hurt the most by the expensive food prices.