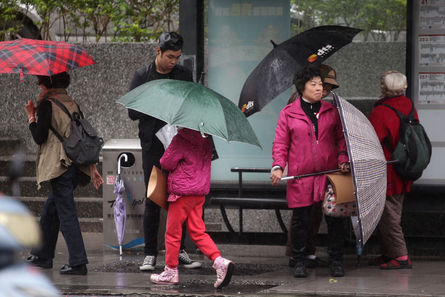 Taipei, Jan. 30 (CNA) A weather front that has brought rain to all
parts of Taiwan since Thursday will gradually move away from the
island, ushering in cooler air from the north to bring temperatures
down by two to three degrees Celsius in northern Taiwan, the Central Weather Bureau said Saturday.

There could still be some showers around the country Saturday but any precipitation should be far more moderate than during the two previous days, especially in the latter half of the day, the bureau said.

The main feature of the weather during the weekend will be northeastern seasonal winds, which will bring strong gusts to coastal and open areas in Taiwan proper and the outlying islands, the bureau said, warning the public to use extra caution when engaging in water activities along the coast.

Temperatures will slide in northern Taiwan, with highs around 16 or 17 degrees, according to the forecast. In other parts of the country, temperatures could rise to between 19 and 23 degrees.