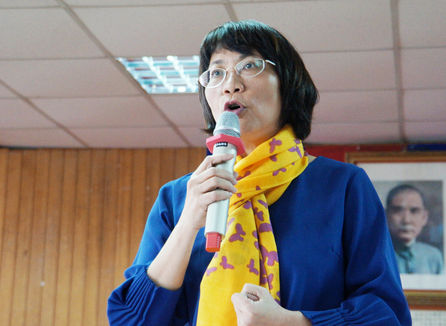 TAIPEI (Taiwan News) – Former vice-presidential candidate Jennifer Wang did not break any laws by buying and selling about a dozen military apartments, prosecutors said Friday, officially closing her case.
During the race for the January 16 presidential election, Wang faced allegations she had violated the law by buying apartments originally designed for low-income military families and then reselling them at the profit. The case came into the open shortly after Kuomintang presidential candidate Eric Liluan Chu picked the former labor minister as his running mate.
Democratic Progressive Party members such as lawmaker Tuan Yi-kang accused her of illegal real estate speculation, leading her to sue him for aggravated defamation.
Taipei district prosecutors investigated the case and came to the conclusion that Wang had bought 12 apartments, but that the transactions were legal, while she did not buy the properties under the names of others or resold them within a five-year period. Since the whole process developed according to the law, no charges should be filed and the case would be closed, prosecutors announced Friday.
Tuan would also not be prosecuted because he conducted the necessary research into media reports and Control Yuan documents, prosecutors said.
In the wake of the allegations, her husband, Huang Tung-hsun, resigned from his position as anti-corruption chief at the Judicial Yuan, while both moved out of their low-rent apartment.
Chu and Wang still lost the election by 31 percent to DPP Chairwoman Tsai Ing-wen and running mate Chen Chien-jen, who received 56 percent of the vote.