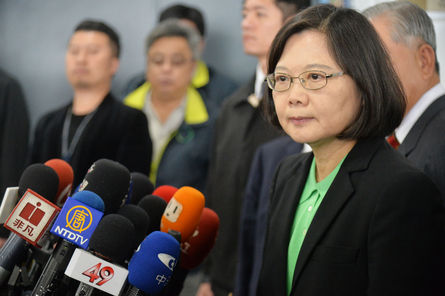 Tsai tight-lipped about if to visit Taiping Island

Taiwan’s president-elect Tsai Ing-wen Thursday reiterated Taiwan’s sovereignty over the disputed islands in the South China Sea but was tight-lipped when asked whether she will visit Taiping Island after taking office on May 20.

Democratic Progressive Party’s stand on the South China Sea disputes is to insist Taiwan’s sovereignty in this region, ensure freedom of navigation, and settle related disputes peacefully according to international law and the Law of the Sea Convention, Tsai said. As a member of the region, “We have a shared responsibility to maintain peace and stability in the region,” she added.

Earlier in the day, Mark Toner, deputy spokesman of the U.S. State Department, expressed U.S. government’s disappointment over Ma’s visit to the island, saying it does not contribute to the peaceful resolution of disputes in the South China Sea.

However, Toner did not touch on whether Ma's visit will affect U.S.-Taiwan relations, saying only that the two sides have "very strong relations" and that the U.S. looks forward to building stronger relations with Taiwan under Tsai Ing-wen, who was elected president on Jan. 16.