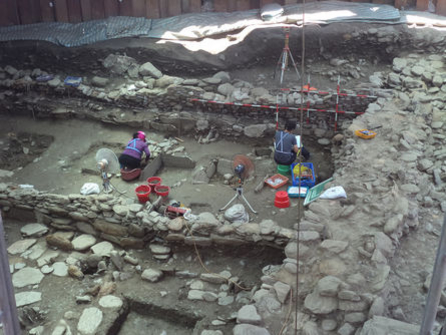 The Directorate General of Highways (DGH) of the Ministry of Transportation and Communications (MOTC) convened the 19th meeting of the “Suhua Highway Improvement Project Supervision Group Discussion” on Wednesday, and was faced with protesters demanding the authorities to change the route of the project, so that the archaeological experts could work to enhance the preservation of the archaeological remains of Hanben culture.

Ten members of the Raging Citizens Act Now (RCAN), a social movement organization advocating environmental protection, gathered in front of the MOTC Wednesday alongside Legislator Tian Chiu-chin, demanding the DGH to change the route of the project and allow archaeologists to expand the excavations and a longer lead time necessary for excavation work.

The group urged the authorities to evaluate the possibility of moving the construction equipment used for the Suhua Highway Improvement Project elsewhere, saying the excavation process was delayed and hindered by the construction plan.

Hanben archaeological site was first unearthed in Aohua Village in Nan’ao, Yilan County in 2012, after the construction workers building the Gufong Tunnel found evidence of archaeological remains that experts say may date as far back as 2,000 years ago. The construction plan was suspended at the time in light of the Cultural Heritage Preservation Act.

After three years of digging, the archaeologists found a large concentration of reddish-brown pottery decorated with geometric patterns, showing a large-scale, highly-concentrated human settlement pattern in the Hanben sites.

According to Mata Taiwan reports, the excavation work was hindered by the construction underway, showing a conflict of interest between the needs for new development and the preservation of archaeological remains. As a major state construction project, the Suhua Highway Improvement Project has come at the expense of preserving the traces of past cultures. However, the archaeological value of the sites lies not only in the artefacts themselves, but in the relationship between human society and natural environment.

The excavation work on the site has found numerous fragments of iron slag, revealing the people at that time already had the knowledge and ability to smelt iron. Additionally, the first layer of the cultural remains has shown striking resemblance to that of the Shisanhang archaeological site in Bali District, New Taipei City, the first discovery of such cultural remains in Taiwan, the Mata Taiwan reports.

The RCAN called on the authorities to respect the archaeological process, find a way to change the route of the project, and allow archaeologists more time to expand the site of their archaeological digs, in order to better preserve such unique cultural assets.