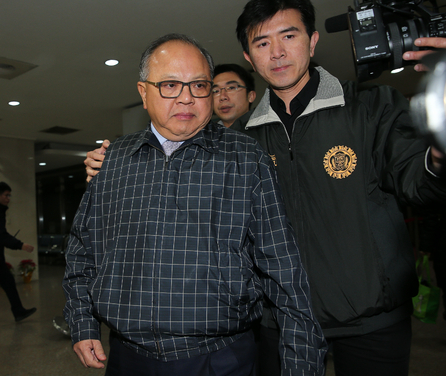 TAIPEI (Taiwan News) – The Taipei District Court approved the detention Wednesday of Legislative Yuan Secretary-General Lin Hsi-shan after he reportedly admitted to having received NT$7 million (US$207,000) in bribes during a train trip.
Investigators raided 19 locations and interviewed 33 people Tuesday in a case alleging that Lin had accepted money from Farnet Technologies Co., Ltd. in return for lucrative contracts to improve online systems at the Legislative Yuan.
Lin’s wife was released on bail of NT$2 million (US$59,000) Wednesday morning, but prosecutors requested the official’s detention, which was approved by the court after a hearing during the afternoon.
After first denying any corruption, Lin later admitted he had met Farnet chief Lee Pao-cheng on the high-speed train in January last year and NT$7 million had changed hands, the Chinese-language Apple Daily reported Wednesday afternoon. There was no immediate comment from prosecutors or attorneys.
An aide and Lin’s wife later took the money to the bank and put it in one of her accounts, reports said. However, Lee still refused to admit his alleged part in the case, while Lin denied that the NT$6 million (US$178,000) investigators found at his home and office was related to the case. As a result, prosecutors also demanded the continued detention of Lin’s aide, Lee and another Farnet manager.
The company had profited from Lin’s actions to the tune of up to NT$300 million (US$8.9 million), reports said. He could face a prison sentence of more than five years.
Prosecutors were planning to look at other deals Farnet was involved in, including computer hardware and software systems at the Hsinchu City Government, the former Taichung County Council, and the National Palace Museum.
Officials denied the investigation was part of a renewed power struggle between President Ma Ying-jeou and Legislative Speaker Wang Jin-pyng. Lin, a former Kuomintang lawmaker, was seen as a Wang confidant, and has been in his function as long as the speaker, for a total of 17 years. Last Saturday’s election saw Wang re-elected, but because the KMT lost its majority, another term as speaker looks out of his reach.