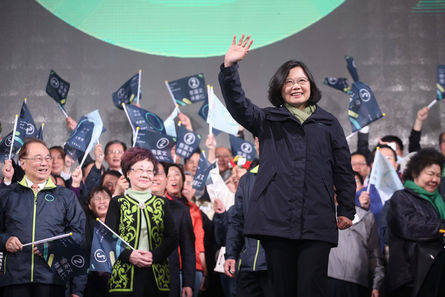 TAIPEI (Taiwan News) – President-elect Tsai Ing-wen and her running mate Chen Chien-jen will tour the country from January 21 through 29 to thank voters for their support, the Democratic Progressive Party announced Tuesday.
Tsai won 56 percent in a landslide victory last Saturday, while her party won an unprecedented 68 seats at the 113-member Legislative Yuan. The new president and the vice president will be sworn in on May 20.
In order to thank voters, Tsai and Chen would visit most parts of the country and attend tea parties, beginning with Kaohsiung, Pingtung and Tainan on January 21. The areas are known as DPP strongholds, while Tsai’s parents hailed from Pingtung County.
Northeastern Taiwan’s Yilan County would follow January 22, with the other parts of the country to be visited on January 23, 24, 26, 28 and 29, according to the DPP.
Tsai came out first in all areas of Taiwan, with the exception of the counties of Hualien and Taitung on the east coast and the offshore islands of Kinmen and Matsu, where Kuomintang candidate Eric Liluan Chu won. Overall, Chu received 31 percent of the vote, while People First Party Chairman James Soong finished with 12 percent.
DPP spokesman Yang Chia-liang said the party would listen and keep an open mind to suggestions by local party leaders to move some of the top government bodies out of Taipei to Central and Southern Taiwan.
After the elections, Tainan Mayor William Lai and Taichung Mayor Lin Chia-lung proposed to move the Legislative Yuan and the Presidential Office to their cities respectively.