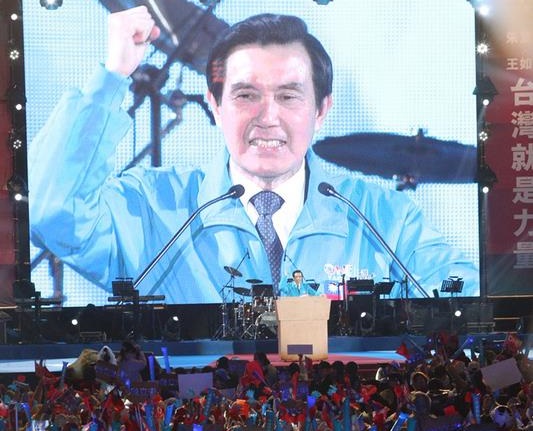 Ma drums up support for Chu

TAIPEI (Taiwan News) – At the Kuomintang’s final campaign rally Friday evening, President Ma Ying-jeou asked supporters to vote for presidential candidate Eric Liluan Chu in the January 16 elections.
Campaigning for Saturday’s presidential and legislative elections should not go beyond 10 p.m. according to official regulations. All three major candidates have scheduled large-scale final events, with Chu staging his in Banqiao, the district where he usually goes to work as mayor of New Taipei City.
Chu himself spent Friday traveling in a motorcade with his wife through the streets of Taipei City before venturing down to Taichung in Central Taiwan, a key battle area between the Democratic Progressive Party-oriented South and the usually pro-KMT North.
During his appearance on stage Friday evening, Ma praised his own record, saying he had performed better than his predecessors Lee Teng-hui and Chen Shui-bian. While he admitted that the execution of some of his policies had not been perfect, he said he had learned the lesson and made the necessary changes.
Ma bowed eight seconds to ask the public to vote for Chu and for the KMT. The president also quoted a series of statistics to say that Taiwan was now the 19th wealthiest country in the world, the second safest, and the fifth in raising the basic minimum wage.
He also described his meeting in Singapore last November with Chinese President Xi Jinping as a “bridge of peace” across the Taiwan Straits.
Chu’s competitors in Saturday’s election are DPP Chairwoman Tsai Ing-wen, who was staging her final rally in front of the Presidential Office Building, and People First Party Chairman James Soong, who was appearing at the Taipei Municipal Stadium.