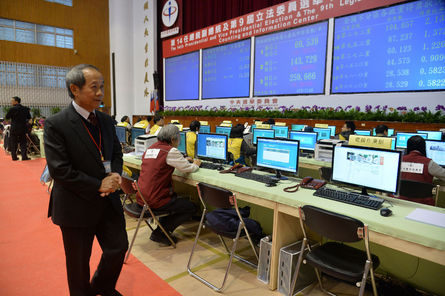 All campaign rallies must end at 10 p.m.: CEC

Liu pointed out that the nation’s eligible voters can cast their ballots beginning 8 a.m. to 4 p.m. Saturday, while cautioning all candidates that those rallying or partaking in any campaign activities during Election Day are liable to fines between NT$500,000 to NT$5 million.

There are just over 18.78 million eligible voters in the country's 22 cities and counties, the CEC said, adding that it estimates first-time voters to be around the 1.29 million mark.

In order to facilitate voters seek their designated polling stations, the CEC has set up a TGOS location search in its official website using Google Map.

Cellular phones and mobile devices are forbidden to be carried into the polling booth, the CEC said, warning voters that those caught will be subject to a one-year sentence and NT$30,000 fine.

Furthermore, anyone caught tearing up the ballot paper will also land in a fine ranging between NT$5,000 to NT$50,000.

15,582 polling stations across the country will be open from 8 a.m. to 4 p.m. Saturday, and preliminary results will become available within hours of the polls closing, according to the election commission.