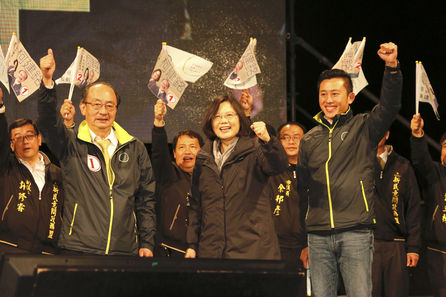 TAIPEI (Taiwan News) – The Democratic Progressive Party was preparing to finish its campaign for the January 16 presidential and legislative elections right in front of the Presidential Office Building Friday night.
DPP Chairwoman Tsai Ing-wen is widely seen as Taiwan’s first woman president, and only the second one from her party since direct presidential elections began in 1996.
Tsai, her vice-presidential running mate Chen Chien-jen and most of the opposition party’s top politicians were expected to turn up for the event at the end of a “Golden Week” of rallies and motorcades across the country.
The Taipei City police were mobilizing 113 officers as well as snipers and dogs to make sure the DPP event went on without incident, reports said. Taiwanese politics usually don’t feature violence, but on the eve of the 2004 presidential election, DPP incumbent Chen Shui-bian and his vice president, Annette Lu, were injured when an allegedly unemployed man fired a gun at them in Tainan.
Surveillance cameras and strong lighting equipment will also be on standby in the event of problems Friday night, police said.
The ruling Kuomintang was planning a similar final rally in Banqiao, the district where the New Taipei City Government is located, which its chairman and presidential candidate Eric Liluan Chu runs as mayor.
The third presidential candidate, People First Party Chairman James Soong, will hold his last rally of the campaign at the Taipei Municipal Stadium in the capital.